Digging in the dirt…

This month, we uncover ways to test out archaeology in the classroom. Inside this issue: textual lacunae, archaeological observations, items in a Roman town, the Roman poet Ovid, the word “excavate,” and more!

Background: Archaeologists often discover fragmented texts which have many missing words or letters. It is important for students to understand the fragile nature of many ancient sources and the decisions scholars must make about what the lacunae might have said.

Introduction: Students will write a Latin letter, copy the original, and then remove some letters. After that, another student will try to understand what it says from what is left. A list of stock phrases will guide less experienced Latin learners as they compose and decode the letters.

Objectives: Students will discover the process of recovering a text. Students will also develop Latin reading prediction skills by picking up context clues from surrounding words.

Special Concerns: This might make a bit of a mess as papers are scattered on the floor, so be sure to save time at the end of class for clean-up.

Background: Archaeologists often need to learn what people were like based on the objects they left behind. This lesson helps students put themselves in the shoes of archaeologists, using modern objects found in their homes.

Special Concerns: Remind students not to put anything in the bag that has their name on it, and not to label the bag.

Online Resource: Items in a Roman Town
Each issue will feature a new or popular online resource that could prove useful for Latin and Classical Studies instruction. We aim to stay current so that you can wow your students with how “with-it” you are when it comes to technology!

The “Roman Town” game on this website asks students to identify the people or objects in an image which don’t belong in a Roman town. The game is a nice way to help students distinguish between time periods. Play it as a class, and use it as a way to discuss the daily lives of ancient Romans!

Famous Romans: The poet Ovid
Each issue will feature a famous individual from Greek or Roman history whom you may wish to explore with your students.

The Roman poet Ovid really puts history in perspective! His quote, “prisca iuvent alios, ego me nunc denique natum gratulor” reveals how the term “ancient” depends on the time period of the person who is using the word. The quote means, roughly: “Let others praise ancient times; I am glad I was born in these times.”

Ovid’s full name was Publius Ovidius Naso, and he lived from 43 B.C. to 17 A.D. One of his most well-known works throughout the centuries has been The Metamorphoses, which tells many mythological tales of transformation, such as “Daphne and Apollo” and “Pygmalion.” This work has inspired many authors throughout history, including Shakespeare. In fact, Shakespeare’s Romeo and Juliet is based on the story of “Pyramus and Thisbe,” which was told by Ovid.

Ovid is also known for his collections of poems relating to love, such as the Amores and the Ars Amatoria. He was eventually sent into exile by the emperor Augustus and lived the rest of his life near the Black Sea.

Random Find: Speech Bubble Sticky Notes
Many items being sold today do not directly connect to Latin and Classical Studies, but with a little effort, we can adapt them to serve our purposes. This section explores these types of objects. 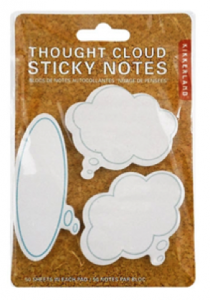 Skye Shirley, writer for The Shooting Star, found these in the gift shop of the Museum of Fine Arts in Boston. She loved the fun shape and thought they could be used many different ways!

Possibility #1: Print out images of paintings or sculptures from mythology, laminate the images, and then give each image and a few sticky notes to a pair of students. The students can write Latin or English quotes in the speech bubbles and stick them on the image, which will make it seem as if the characters are speaking. Teachers can give out awards for the funniest, most accurate, or most grammatically correct speech bubble!

Possibility #2: To review myths, write a quote from each character in your mythology studies on a sticky note. Place one sticky note on each student’s back, and have students move around the room, guessing who their character is. Students need to both recognize the speaker of the quote as well as know the name and information of the character.

Featured Word: excavate
Each issue will feature a challenging English word that we encourage you and your students to explore together. The English word will always come from one or more Latin words.

The Latin word, excavare, gives us our modern word, “excavate.” In excavare, the “ex” means “out,” and “cavare” means “to make hollow.” Explain to students the meaning of “excavate,” and help them to see how it very closely connects to the meaning of its Latin ancestor, excavare. Students might also be interested to learn that only about two-thirds of the city of Pompeii has been excavated, and so a new generation of archaeologists will be needed in order to make new discoveries!

Advice & Questions:
Q: My students are very interested in Latin. How can they continue to explore their newfound interest in Latin over the summer?

A: There are many great resources available for children interested in learning more about Latin and Ancient Rome! They might like to view our new eTogaTrek video series, which is available online for free. Each video features a different topic about Roman culture and presents a hands-on activity for students to do. In addition, students may wish to do summer reading related to Ancient Rome. Several lists of children’s books on the ancient world are available on the Ascanius website here (near the bottom of the page). Finally, pre-teens might enjoy the Roman Mysteries series, which is both a book series and a television series.