Inside this issue: Back-to-school in Ancient Rome, origami in Latin, the words “pen” and “paper,” the Roman Quintilian, and more!

*N.B. – This lesson is a shortened version of the Mock Roman School lesson which appears in the Ascanius publication Leap into Latin. The full lesson also includes a memorization passage and activity.

Introduction: This lesson introduces students to the methods and challenges of Roman education. Clad in togas, they will learn what schools in ancient Rome were like, and they will experience writing on a tablet like Roman students would have done.

Background Information: The Romans had no public school system in the way that we do: a teacher ran his own school, each teacher only had a handful of students, and there was no curriculum standard among schools. Parents were not required to send their children to school. Many Romans were illiterate, some left the house to attend schools, and some were taught at the home by tutors (Greek slaves). The only free form of education was that done by the parents at home: schools required daily payment and slave tutors had to be purchased. Early in Rome’s history, only boys received a full education, while girls would stay at home with their mothers to learn about housework and weaving. But by the Imperial Period (A.D. first century), both boys and girls were educated by professional teachers. Teachers relied heavily upon corporal punishment – one thing that has fortunately changed in the past 2000 years!

There were generally four stages to formal Roman schooling. Children would be educated in the home until the age of about 6 or 7 by their parents and household slaves. After this, they would be sent to an elementary school, where a litterator would teach them practical lessons for everyday use: basic reading and writing, arithmetic, Roman numerals (the most common number system used in ancient Rome), telling time, and weights and measures. They could then move on to grammar school at age 12 or 13, where they would learn Latin and Greek literature from a grammaticus. From there, they could proceed to rhetoric school around age 16, where they would learn public speaking (roughly equivalent to a college education) under the guidance of  a rhetor. Parents could stop their children’s education at any point along this course if they could no longer afford it.

A typical school day began early in the morning before dawn. A special slave (paedagogus) would escort the child from the house to the school and carry his or her books and writing supplies. They would use wax tablets for writing: letters were etched into the beeswax with a stilus, and erased by scraping over the words and smoothing out the wax with the flat end of the stilus. Thus a wax tablet would last for a long time, but eventually the wax would have to be melted and smoothed out again. (The people in the featured image for this issue are holding such wax tablets.) They learned the languages by memorizing and reciting short passages of Latin and Greek. Pebbles and abacuses were often used for counting and arithmetic.

Objectives: Students will be able to explain what it was like to be a Roman student. They will also make connections between modern American schooling and ancient Roman schooling.

Introduction: In this lesson, students will create origami models using Latin instructions, which will give them practice with imperatives.

Objectives: Students will be able to carry out simple commands in Latin and will also be able to compose Latin sentences using those same commands.

Background Information: Paper as we know it is a modern luxury. The Romans had papyrus but did not have nearly the volume and variety of paper materials that we have today. What might an Ancient Roman have thought of the idea of folding paper to create a tiny work of art such as origami?

Online Resource: A tutorial for creating wax tablets
Each issue will feature a new or popular online resource that could prove useful for Latin and Classical Studies instruction. We aim to stay current so that you can wow your students with how “with-it” you are when it comes to technology! 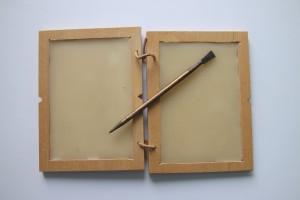 If you would like to create a more authentic reproduction of Roman tablets, check out this video tutorial. It provides clear, step-by-step instructions in just a few minutes!

Also, if you would prefer written instructions for making wax tablets, look no further than the November 2013 issue of The Shooting Star, which explored the topic of writing. It contains step-by-step instructions which could be printed.

Random Find: Boogie Board Play and Trace LCD Writing Tablet
Many items being in the world today do not directly connect to Latin and Classical Studies, but with a little effort, we can adapt them to serve our purposes. This section explores these types of items. 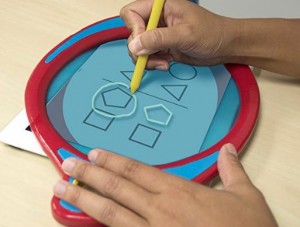 This writing tablet can fulfill the same functions as a Roman wax tablet, but it is certainly quicker to erase! With the click of a button, the screen is cleared and ready to use again. Students could use its transparent surface to practice writing in a Roman script. Simply place the writing handout (from Lesson 1 above) under the tablet and trace.

How we found it: The Shooting Star writer Kristen Bortner has this tablet for her daughter, who uses it to practice tracing the letters of the alphabet. Its reusable nature reminded Kristen of ancient Roman tablets.

Featured Words: Pen, Paper, and Library
Each issue will feature a challenging English word that we encourage you and your students to explore together. The English word will always come from one or more Latin or Greek words.

Many of the common words we use in English today come from Latin writing materials.  While Roman school children often used wax tablets and a stylus to write, today you probably use a pen and paper.  “Pen” comes from the Latin word “penna” (feather) which Romans used to dip into ink (often from squid) and write on paper.  We get the word “paper” from the papyrus plant that the Egyptians first used as a writing surface. The rind of the papyrus plant, which became glutinous when wet, was called “liber” and gives us the Latin word for book and our word for a good place to borrow books, the library.

Famous Roman: Quintilian
Each issue will feature a famous individual or group from Greek or Roman history whom you may wish to explore with your students.

We get a lot of our information about education in Ancient Rome from Quintilian, whose full Latin name was Marcus Fabius Quintilianus.  He lived from about 35 A.D. until about 100 A.D. and is most famous for being a teacher of rhetoric (or public speaking) and for writing a guide on the teaching of rhetoric called the Institutio Rhetorica.  In this work, Quintilian famously describes the perfect teacher:

Let him therefore adopt a parental attitude to his pupils, and regard himself as the representative of those who have committed their children to his charge. Let him be free from vice himself and refuse to tolerate it in others. Let him be strict but not austere, genial but not too familiar: for austerity will make him unpopular, while familiarity breeds contempt. Let his discourse continually turn on what is good and honourable; the more he admonishes, the less he will have to punish. He must control his temper without however shutting his eyes to faults requiring correction: his instruction must be free from affectation, his industry great, his demands on his class continuous, but not extravagant. be the object of their affection and respect. And it is scarcely possible to say how much more readily we imitate those whom we like.

Do you have a teacher who strikes the perfect balance that Quintilian recommends?

Quintilian also extols the virtues of writing on wax tablets in Book 10, chapter 3 of the same work, but says that it is easier to read something written on parchment:

There are also certain minor details which deserve our attention, for there is nothing too minute for the student. It is best to write on wax owing to the facility which it offers for erasure, though weak sight may make it desirable to employ parchment by preference. The latter, however, although of assistance to the eye, delays the hand and interrupts the stream of thought owing to the frequency with which the pen has to be supplied with ink.

He further instructs that wax tablets should be kept narrow:

The wax tablets should not be unduly wide; for I have known a young and over-zealous student write his compositions at undue length, because he measured them by the number of lines, a fault which persisted, in spite of frequent admonition, until his tablets were changed, when it disappeared.

We could almost imagine Quintilian wanting to write a list of required school supplies for students similar to the ones we find in stores today.

And now for something a little different! Students who are interested in how parchment was made may like this interesting (and a bit gross) explanation from the Cornell University Library Conservation. Enjoy! 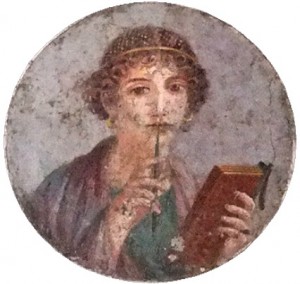