This month we’ll explore the exciting world of chariot racing. Inside this issue: a chariot race simulation, a chariot racing spoken-Latin board game, a reconstruction of the Circus Maximus, a famous Roman athlete, and more! 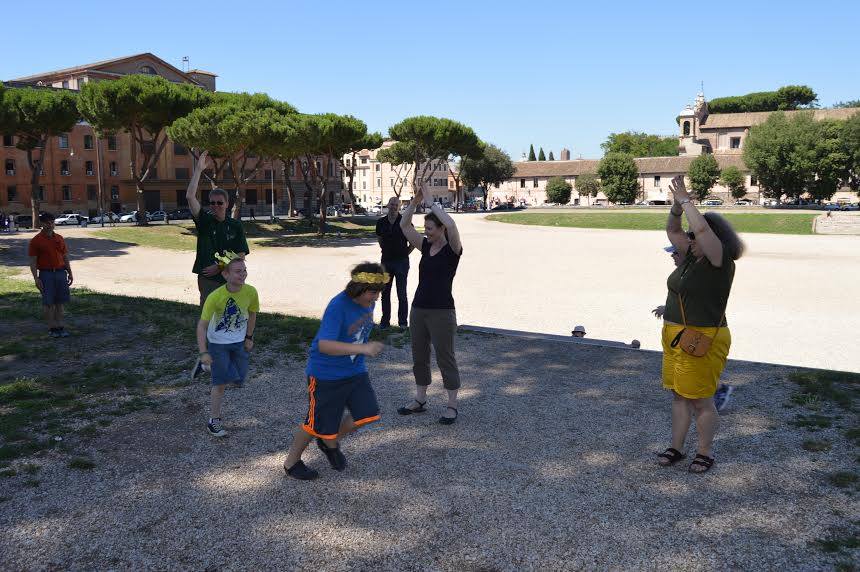 Introduction: This lesson gets students involved by simulating a chariot race. This activity will get kids up and moving and is ideal for a gym or outdoor area. It has been used in our LatinSummer Rome program. In fact, you can see from the picture that our students did this activity at the site of the Circus Maximus itself!

Background: One of the most popular sporting events in Ancient Rome was chariot racing. Drivers of chariots pulled by horses competed to be the first to complete seven laps around the track. VRoma has an excellent overview of chariot racing here: http://www.vroma.org/~bmcmanus/circus.html

Special Concerns: As this is an outdoor activity, it is important to remember that inclement weather could create a need for rescheduling. Also, students could potentially be hurt by racing around the metae, so it is best done in soft grass and with students who will not be so competitive that they forget how to play safely.

Introduction: In this lesson, students use a chariot-racing board game to practice speaking Latin sentences that involve the colors of chariot racing teams, numbers, and conversion from Present Tense to Perfect Tense. They also learn about common elements of a chariot race.

Background: Part of the allure of going to the circus was the danger that could strike at any given moment, not unlike today’s popular car races such as NASCAR. In this board game, students will advance by both skill (i.e., speaking Latin) and by luck (wild cards).

Objectives: Students will be able to name in Latin the four colors of the chariot racing teams and to describe major elements of a chariot race. They will also be able to use Roman numerals and to change the verb prōcēdō from First Person Present Tense to Third Person Perfect Tense.

Special Concerns: Students with less Latin experience may wish to use the script while playing.

Students often have a difficult time picturing what the Circus Maximus might have looked like in Roman times. This virtual reality reconstruction from Progetto Traiano can help them to get a sense of what it would have been like to visit this immense structure!

Famous Roman: Gaius Appuleius Diocles
Each issue will feature a famous individual or group from Greek or Roman history whom you may wish to explore with your students.

Gaius Appuleius Diocles is not a name most people learn about in history class, but it was certainly a name recognized by many Romans of the second century A.D.  Diocles was a driver in the chariot races. We know about him because his career was unusually long, and an inscription recorded his success.

Due to the dangers involved in the races, many drivers died around age twenty-five. Diocles, however, drove successfully until he retired at the age of forty-two! He drove for three of the four teams: He began his career with the White team at age nineteen, but he later switched to the Red team and after that the Green team. By the time of his retirement, Diocles had achieved 1,462 victories! Similar to modern athletes, drivers such as Diocles were highly paid for their skills.  It is said that Diocles’ race winnings were such a high amount that he could have paid to supply grain for the entire city of Rome for a year. Some people even estimate that Diocles was the highest-paid athlete of all time!

Random Find: Do-it-yourself Dry-erase or Chalkboard Spinner
Many items being sold today do not directly connect to Latin and Classical Studies, but with a little effort, we can adapt them to serve our purposes. This section explores these types of objects.

Have you ever wanted your own spinning prize wheel? The Shooting Star editor, Kristen Bortner, always felt like her classroom was incomplete without one.  For that reason, she was thrilled when she recently saw this simple do-it-yourself project on the blog Doodle Craft: It’s a brilliant idea of making a dry-erase spinner wheel out of a Lazy Susan from Ikea! 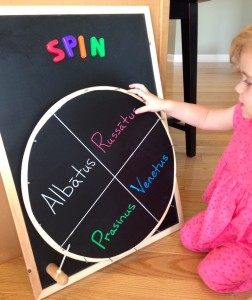 Kristen followed the instructions above to make her own spinner, pictured at the left. It really was simple! She made a few small changes, though. Instead of using a piece of wood, she glued the Lazy Susan to a framed magnetic chalkboard, which allows for the display of additional information as desired. She also cut one large circle to cover the spinner, instead of using many separate triangles. By doing this, she can easily change the number of sections on the spinner, depending on how many she needs for various activities. Finally, she used chalkboard-surface paper instead of dry-erase paper, because it erases well and works beautifully with chalkboard markers!

Featured Word: currency
Each issue will feature a challenging English word that we encourage you and your students to explore together. The English word will always come from one or more Latin words.

Our English word “currency” is derived from the Latin word currere, “to run.”  If we consider the word “current,” which refers to anything that is “running” at the moment, then it makes sense for currency to mean the money that is “running” around in an economy at a given time. Currere gives us plenty of other words as well. Tell students to picture a chariot race as they ponder our word “course,” a place where a race is “run.”  Ask them if they can figure out how “cursive” and “curriculum” are also related to currere!

For lots of word study fun, in a chariot racing set-up, check out this board game, LUDI At The Circus Maximus!

This vocabulary list from The Shooting Star writer Abbi Holt provides students with some key vocabulary about chariot racing:
https://docs.google.com/document/d/1zjCz7zVJjDe33pAPFCpqnrUl2AdZiETqxWJG-ivhzRc/edit?usp=sharing

Students will enjoy looking at this clever Lego project!  The set doesn’t exist, but perhaps this could inspire students to create their own models.
https://ideas.lego.com/projects/38970

Here’s a spoken Latin reenactment of the taking of the auspices before the races:
https://www.youtube.com/watch?v=JXrZ-selgWg

Quadriga: This is a strategy game available from iTunes. Players can race at 43 different courses in this detail-oriented game, which is similar to an old board game called Circus Maximus.
https://itunes.apple.com/US/app/id883554952?mt=8

Does your school or club conduct a Roman chariot race in some way?  How many different chariot racing traditions do we have among our members?  Let’s share them in the comments section!

Each person who participates will be entered in a raffle to win an ebook version of our Vocabula Picta Latin Picture Dictionary! Comment by July 1 in order to be eligible to win! 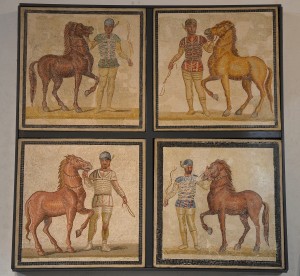