Show me the money!

Inside this issue: an introduction to Roman coins, the emperor Diocletian, Roman coin replicas, the word “pecuniary,” an interview with a coin collector, and more!

Introduction: In this lesson, students get an introduction to Roman coins through a slideshow, and then they make their own coins using clay.

Background: Coins may be small, but they are a big topic!  In addition to standing for a guaranteed value that made buying and selling easier, Roman coins served another purpose. They enabled rulers to spread their own images and messages throughout the vast empire. Today, coins often help to fill in the gaps of our knowledge of the Roman world. The only surviving portraits of some emperors are on coins. In addition, coins can show us how monuments originally looked, and they can help to confirm significant dates. This lesson only skims the surface but hopefully whets the appetite for more.  Here are some recommended websites for teachers or students who are interested in learning more about Roman coins:

Objectives: Students will be able to tell basic information about coin terminology, the process of making Roman coins, and similarities between Roman coins and American coins.

Introduction: In this lesson, students will learn about common abbreviations on Roman coins by viewing examples, and they will practice identifying the abbreviations on some coins in a card-matching activity.

Background: Each ancient coin contains a wealth of information! Decoding that information may seem a bit daunting at first, but with a little practice anyone can do it. After students view enough coins, they may come to recognize specific emperors by their detailed portraits on the obverse side. However, students can begin identifying some information on coins right away by learning a small number of common Latin abbreviations. The Romans loved filling the coins’ legends (from “legere,” to read) with honorific titles and other details, but they didn’t have much space to work with. (Their coins were around the same size as our modern ones.) For this reason, when you examine a Roman coin, you will see short abbreviations that stand for words or phrases. There are not spaces between the abbreviations, but by familiarizing themselves with some of the common abbreviations, students can begin to make sense of them.

Objectives: Students will be able to recognize common abbreviations on Roman coins and tell what they mean.

Special Concerns: Some students may find it overwhelming to attempt to decipher the coins. The set of Myth Coin Cards will be the easier set, since these coins include less text and contain artwork that may be familiar to many students. It could also be helpful to give students fewer cards at a time.

Online Resource: Create Your Own Roman Coin
Each issue will feature a new or popular online resource that could prove useful for Latin and Classical Studies instruction. We aim to stay current so that you can wow your students with how “with-it” you are when it comes to technology! 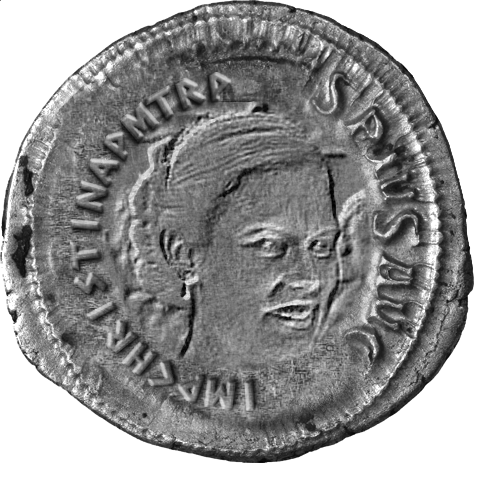 If you ever visit Bath, you can view a hoard of coins on display at The People of Aquae Sulis Gallery. The Beau Street Hoard contains 17,577 Roman coins which were found in eight different money bags. However, from the comfort of your own home or classroom, you can create your own Roman coin using the museum’s website. When you visit Bath’s Virtual Hoard, you can choose from three coin design options, upload a photo of yourself, and then type your own inscription. The website will generate an image of a coin which can be added to their online gallery or can be saved to your own computer. This is a great way for students to personally connect with coins and practice using the abbreviations learned in Lesson 2!

Famous Roman: Diocletian
Each issue will feature a famous individual or group from Greek or Roman history whom you may wish to explore with your students.

Diocletian was Emperor of Rome from 284 to 305 A.D.  He became Emperor after a period known as the “Crisis of the Third Century” which began after the Emperor Severus Alexander was assassinated by his own troops, leading to about fifty years of instability in the Empire. Diocletian is probably remembered by history more for his persecution of Christians than anything else, but he did do some good for the Roman Empire by instituting financial and military reforms. Many historians think that Diocletian’s reforms gave the Empire the stability it needed to last another 150 years.  Fun fact: Diocletian is the only Roman Emperor who stepped down voluntarily.  He retired to his palace in Dalmatia (modern day Croatia) which you can see today in the modern city of Split.

We include Diocletian here because of the information on Ancient Roman coinage and economics that records from his rule have left behind.  Specifically, in 301 A.D., Diocletian issued the Edict on Maximum Prices.  This edict (although it survives in fragments only) has given us important information on the relative prices of goods, as it sought to fix a maximum price for goods (and wages) in order to combat inflation.  The most valuable item (costing 150,000 denarii) was a pound of purple silk.  A lion also cost the same amount.  Unfortunately, the prices Diocletian set were too low for some traders, and many people went back to bartering or a “black market” economy. Diocletian inadvertently contributed to the inflation by minting more coins of low metal value.  By the third century, for instance, silver was almost non-existent in coins.  The silver denarius was replaced by the “Antoninianus” which was a bronze coin with a slight silver wash to make it appear silver.

Random Find: Roman Coin Replicas
Many items being sold today do not directly connect to Latin and Classical Studies, but with a little effort, we can adapt them to serve our purposes. This section explores these types of objects. 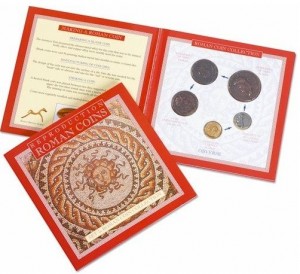 This set of replica coins displays five life-size coins contained in clear blister packs for viewing on both sides. They include a denarius of Augustus, an aureus of Claudius, a dupondius of Nero, a sestertius of Nero, and an as of Antoninus Pius. Teachers can use these replicas to introduce students to Roman coins without breaking the bank!

Featured Word: pecuniary
Each issue will feature a challenging English word that we encourage you and your students to explore together. The English word will always come from one or more Latin words.

In early Roman times, wealth was measured by how much livestock a person owned.  Bartering and trade began with bronze bars used to represent the property.  These bronze bars often had an illustration of cattle on them.  The Latin word for money (“pecunia”) derived from the Latin word for cattle (“pecu”). The English words “pecuniary” (relating to money) and “impecunious” (poor) derive from the Latin word and retain a reference to the archaic practice of cattle representing wealth. 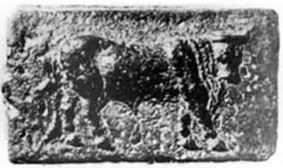 The English words “money” (and “monetary” and “mint”) derive from Juno Moneta.  “Moneta” was an epithet of Juno, and her temple with this name was the first place where the Romans minted their coins and where they stored coins.  It is possible that the word “moneta” derived from the Latin verb “moneo” (to warn/advise) or the Greek word “moneres” (one/unique).  While the ultimate origin is unclear, the Romans believed that Juno watched over the funds in her temple.

We had a chance to correspond with Doug Smith, a numismatist who lives in Virginia.  He also maintains a website, http://www.forumancientcoins.com/dougsmith/, which is an excellent resource for anyone interested in learning more about ancient coins.

Q: How did you become interested in collecting coins?

A:  My parents divorced when I was eight.  My mother was a Registered Nurse at the local hospital and worked long hours including Christmas day etc. so I spent a lot of time alone.  She ‘loaned’ me $50 (a lot of money in the mid 1950’s!) and I bought 5000 pennies at a local vending machine company (there really were things you could buy for one cent back then).  I sorted through the 5000 and usually found a few that were needed for my collection but rolled the rest and took them to the bank to get the $50 back.  A local coin shop would buy duplicate key dates I did not need so I got enough ‘profit’ to replace the half dozen I might have kept for myself out of the 5000.  Rarely I did the same things with other denominations but cents were more fun for the money.   I could never see any wisdom paying a coin dealer more than one cent for a one cent coin but I was most certainly willing to let him pay me 5 cents or 50 cents for special finds.  One day, I noticed he had a dish of ancient coins on his counter marked, “Your Pick – Fifty Cents!”  My mind allowed buying a Roman coin with no denomination in our current system for 50 cents or even some for $5.  That started my hobby of collecting ancient coins.  When my daughter was born in 1974, I thought we needed the money so I sold all but three coins from the early period for $500.  I still have those three.

Q: What do you enjoy most about collecting ancient coins?

A:  Ancient coins reflect the culture that produced them.  Greek city-states identified themselves with gods and animals special to their region.  Roman emperors used reverses that seemed appropriate for that particular time in history.  If the emperor was sick, they might issue coins showing Salus or Aesculapius.  If he defeated the Parthians, he might add Parthicus to his titles and show a soldier spearing an enemy wearing a Parthian style hat.  My favorite college professor told us, “It is more fun to know than not to know.”  The coins have helped me have fun.

Q: What advice would you give a student who wants to learn more about coins or begin a collection?

A: The Internet has changed the world.  We used to say, “Buy the book before the coin.”  Now, I have nothing against buying books but I must say there is enough free information online today that anyone with computer access need not buy hundreds of dollars worth of books to learn a lot about ancient coins.  My website (http://www.forumancientcoins.com/dougsmith/) was one of the best in 2003 when I retired and stopped updating it regularly.  Now there are many other (and some much better) sites available.  Google is your friend.   I suggest learning about a coin before you even think of buying it.  If you see the differences between the good and the bad before you start spending money, you are more likely to enjoy what you collected when you are my age.   We say, “Know the coin or know the seller.”  That means don’t send money to strangers on eBay selling fakes and overpriced coins until you can tell the difference.  There will be a coin show in Fredericksburg in late September and in Richmond in October.  Both will have dealers in ancient coins that would be good to meet when starting a collection.  Face to face contact beats email! 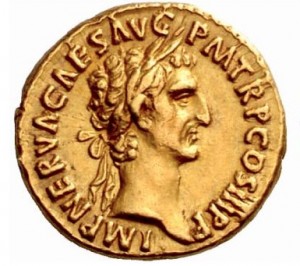