“I think the names of colors are at the edge, between where language fails and where it’s at its most powerful.” – British writer A. S. Byatt

Inside this issue: Latin colors and rock painting, statues in color, Pliny the Elder, the word “iridescence,” and more!

Introduction: In this lesson, students will learn Latin words for colors, and they will paint Latin-themed rocks which they can hide in their community.

Background: At first glance, it seems like a simple topic, but there is much to discuss when it comes to colors in Ancient Greece and Rome! For this lesson, we have chosen eleven Latin color words, the same words used in our “Leap into Latin” publication. These are only a handful of the various words the Romans had for colors. A long, colored list of the names the Romans gave to many different hues can be found here:
http://www.harbornet.com/folks/theedrich/Colores/Colores.htm.  Some students might ask why the Romans had so many different color words. Remind them that we, too, have terms for different shades, and point out a sixty-four-color crayon box as an example.

For the class interested in exploring “big” questions about color, these resources are fascinating:
1. This two-minute video discusses the non-existence of the word “blue” in all of Homer. How does not having a word for a color affect our ability to see it? http://www.businessinsider.com/color-blue-couldnt-see-until-modern-times-2016-3

2. This “Brains On” podcast for kids explores the question, “Do we all see the same colors?” http://www.brainson.org/do-we-all-see-the-same-colors/

Objectives: Students will be able to identify the following colors using their Latin names. 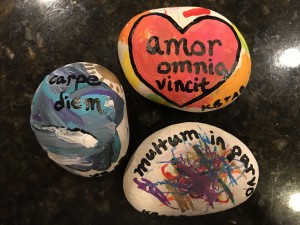 Special Concerns: Some classes may already be familiar with the Latin words for the colors and may view the slideshow activity as practice or a review. Classes with no prior experience with this topic can take their time with the slideshow, which could be used to introduce a few colors at a time over a couple of days. Also, teachers who prefer to use different Latin words for any of the colors can change the color name slides in the slideshow.

Introduction: Break out the art supplies! In this lesson, students will take a look at full-color reconstructions of ancient statues and then try their hand at a reconstruction of their own.

Background: Did you know that the statues of Greece and Rome were originally painted and have lost their colors due to time and weather? We are so used to the gleaming white antiquities exhibits in our museums that it can be difficult for us to imagine brilliantly colored statues. Today, researchers attempt to recreate these statues’ polychromy, the use of many colors. They use ultraviolet light to reveal traces of color and a raking light (beamed from an angle) to show raised areas where designs existed. The resulting reconstructions can give us a sense of the statues’ original appearances. Here are some resources that may be helpful:

Objectives: Students will be able to tell about colorized reconstruction of ancient Greek and Roman statues, including the methods used.

Online Resource: Colorscape
Each issue will feature a new or popular online resource that could prove useful for Latin and Classical Studies instruction. We aim to stay current so that you can wow your students with how “with-it” you are when it comes to technology!

The Colorscape app for iPhone and iPad easily converts photos to coloring pages. Both the line thickness and the level of detail are adjustable.  It works beautifully!  Teachers could create coloring pages related to any topic of study. To practice the Latin words for colors, teachers could label different sections of a coloring page with the Latin color words. The app is free to download, but in order to save coloring page images, you must upgrade to the premium version for $1.99 via an in-app purchase. (It does, however, offer a free one-hour test period of the premium version.) 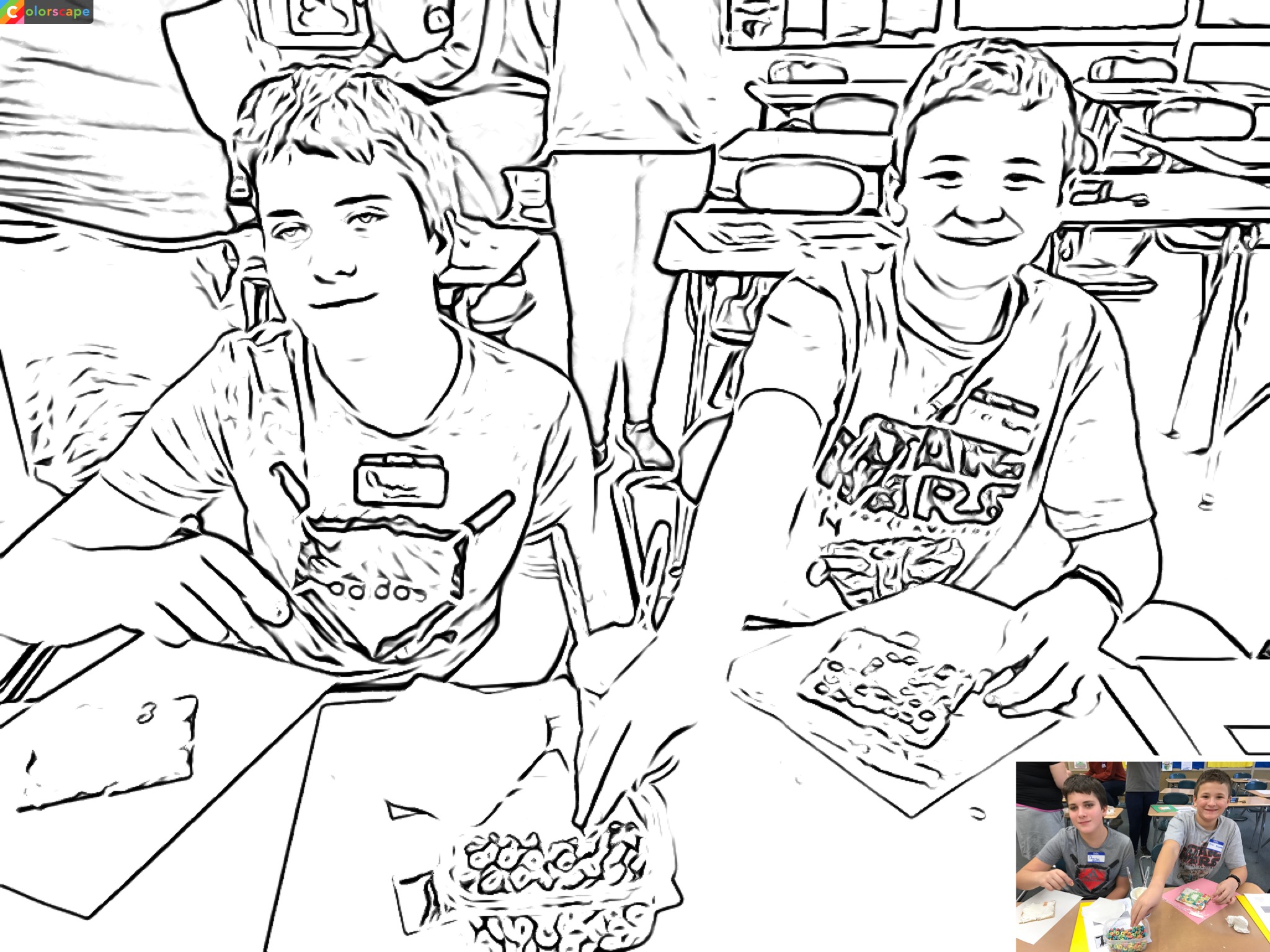 In this sample coloring page created with Colorscape, two students design mosaics using fruit loops and graham crackers. This Roman Explorers program took place in Butler Country, Pennsylvania, in March 2017 and is one of several student programs which your membership fee has helped us to conduct this year. Thank you for your support!

Famous Roman: Pliny the Elder (23 A.D.-79 A.D.)
Each issue will feature a famous individual or group from Greek or Roman history whom you may wish to explore with your students.

We know what colors the Romans had and used from wall paintings, mosaics, and even sculptures whose colors have completely faded.  We also know what words the Roman used to describe colors from their writings that have survived.  While in the modern age, we can create any color we want with chemicals, in ancient times, color had to be found in natural sources and was difficult and costly to manufacture.  It is estimated that thousands of sea snails (the ones the Romans called “murex” was a common one) were needed to dye the border of one tunic or toga purple.  Dyed garments often had to be re-dyed after they were cleaned, or simply because of fading.  It is easy to understand why the purple dye was so expensive and why at least one species of murex was made extinct.

We know a lot about the murex and other natural sources for color from Pliny the Elder’s Naturalis Historia (“Natural History”).  Pliny the Elder (so named to distinguish him from his also famous nephew Pliny “the Younger”) was an admiral for the Roman navy and was a curious observer of anything and everything that he encountered.  He organized his observations into 37 books of his Naturalis Historia, which encompassed wide and diverse fields of study such as anthropology, astronomy, agriculture, botany, biology, and geology.  While some of Pliny’s theories and observations have since been disproven, he nevertheless has given us a lot of information about the natural world the Romans inhabited.

Ironically (and tragically), it was Pliny the Elder’s natural curiosity which caused his death.  He had been stationed at one end of the Bay of Naples when he saw a mushroom cloud across the bay on a fateful day in August, 79 A.D.  He took a ship closer to the strange occurrence to get a better look.  He later realized that there were people who needed to be rescued from the eruption of Mt. Vesuvius and while others were trying to escape the disaster, he sailed towards it.  He asked his nephew, Pliny the Younger, to accompany him, but the younger Pliny replied that he preferred to work on the writing assignments his uncle had given him.  This may be the only time in history that doing homework literally saved someone’s life.

Here is Pliny the Elder’s explanation of the importance of purple to the Romans:

In Asia the best purple is that of Tyre, in Africa that of Meninx and the parts of Gætulia that border on the Ocean, and in Europe that of Laconia. It is for this colour that the fasces and the axes of Rome make way in the crowd; it is this that asserts the majesty of childhood; it is this that distinguishes the senator from the man of equestrian rank; by persons arrayed in this colour are prayers addressed to propitiate the gods; on every garment it sheds a lustre, and in the triumphal vestment it is to be seen mingled with gold.

The Symbolic Color of Togas:

Ancient Roman men who were citizens wore the toga, a long piece of material which was draped around the body.  Togas were made from wool, so their default color was a beige/off-white color, which the Romans called a “toga pura” or “plain toga.” But togas could be dyed different colors or even bleached shining white depending on the occasion of their use. Dye was expensive, especially purple dye, so just having brightly colored clothing would symbolize relative wealth.  Romans who were celebrating at a banquet, for instance, might wear a brightly-colored toga (such as green).  Here are some other colors of togas and what each symbolized:

Random Find: Mix It Up Picture Book
Many items being sold today do not directly connect to Latin and Classical Studies, but with a little effort, we can adapt them to serve our purposes. This section explores these types of objects.

Mix it Up! – A picture book by Herve Tullet 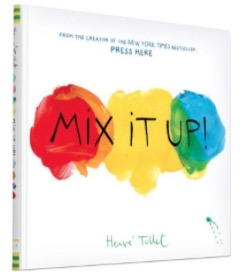 This book invites the reader into a playful adventure in color and the mixing of colors. With instructions to smudge together the colors on the page, shake the book, or press pages together, it is magical and imaginative fun. While meant for children ages 3-6, people of all ages can enjoy this whimsical journey into the world of colors.

How we found it:  Ascanius Membership chairperson Kristen Bortner noticed it while shopping for picture books with her young children.

1. Read the book to students, and use the Latin word for each color rather than the English word. In addition, there are certain parts of the book in which it would be easy for a teacher to substitute Latin words:

2. After reading the book, students can mix paint colors to create their own color palettes on paper. They can then give their colors original names using the Latin words for colors plus other descriptive Latin words.

Featured Word: iridescence
Each issue will feature a challenging English word that we encourage you and your students to explore together. The English word will always come from one or more Latin words. 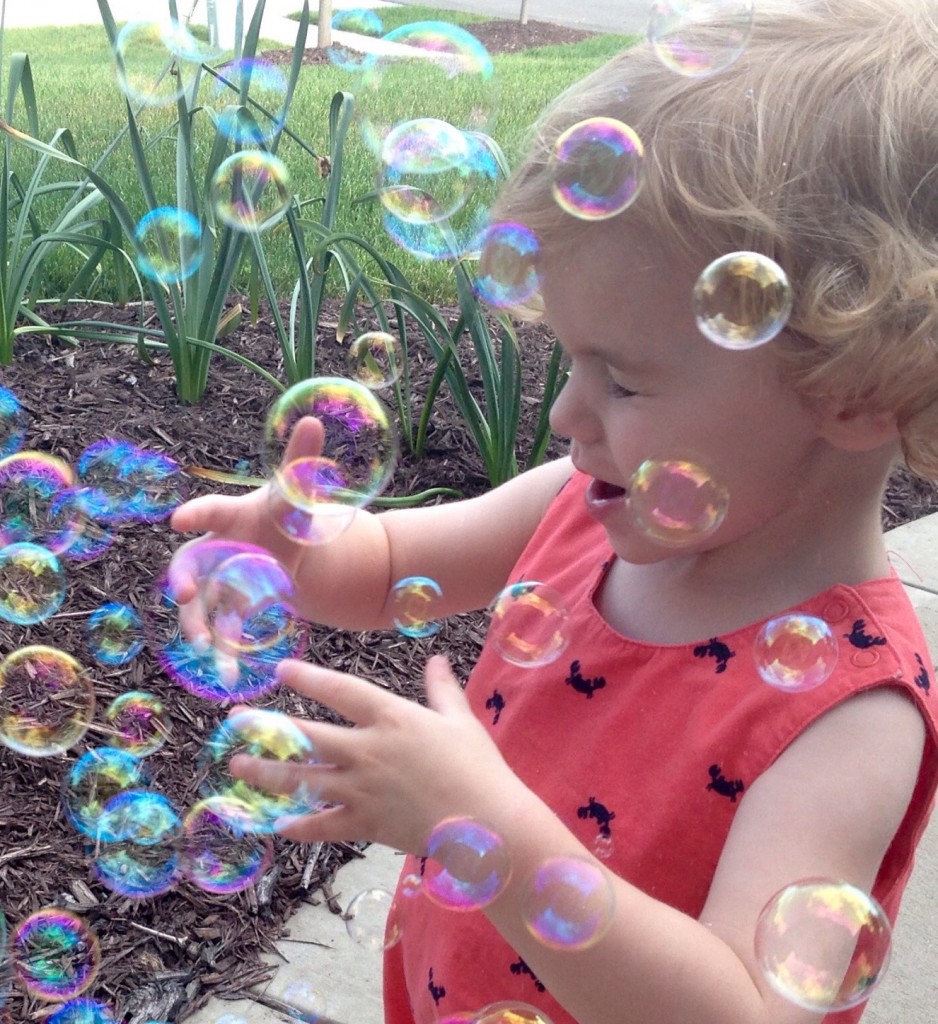 Bubbles, sea shells, and fish scales…What do they all have in common?  All three are examples of iridescence, the playful changing of colors that occurs with a change in viewing angle. Think of soap bubbles. Their many brilliant colors appear to change as you look at the bubble from different angles.

The word iridescence is derived from the Greek word ἶρις (iris), which means “rainbow.” Iris was also the name of the Greek goddess of the rainbow. She was often portrayed as a golden-winged young woman and served as a messenger. Another word derived from ἶρις is the anatomical term “iris.” The iris is the circular part of the eye. By managing the size of the pupil, the iris controls the amount of light that arrives at the retina. It has the name “iris” since it is the colored part of the eye and is often a combination of many colors.

Additional ideas for spoken Latin activities with the colors:

Here are some easy ways to get students talking about colors in Latin: 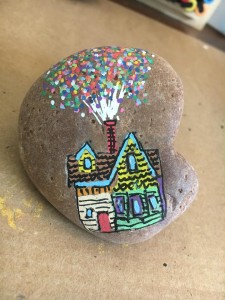