Inside this issue: the days of the week and weather in Latin, calculating calendar dates, our English word “calendar,” Julius Caesar, and more!

1. LATIN LESSON:  The Days of the Week and the Weather in Latin

Introduction: This lesson introduces the Latin names of the days of the week, along with their connections to the gods and goddesses. It also explores Latin weather terms.

Objectives: Students will be able to tell the day of the week and the weather in Latin.

Preparation: Print and cut the Days of the Week Cards and the Weather Cards and card game prior to the lesson.

Introduction: This lesson will introduce students to the Romans’ method of calculating calendar dates, including the terms Kalends, Nones, and Ides.

Objectives: Students will be able to identify major holidays or their birthdays that have been written in the Roman way of calculating dates.

Background Information: The Romans’ method of calculating dates involved counting forward to one of three special days: the Nones (the 5th), the Ides (the 13th), or the Kalends (the 1st day of the next month). The Romans counted inclusively from the day in question to the next special day. For example, to say January 2 in the Roman way, we need to count inclusively to the next special day, the Nones, which is January 5. By counting the 2nd, 3rd, 4th, and 5th, we find that January 2 is four days before the Nones of January. This would be written as: ante diem iv Non. Ian. It is also common for ante diem to be abbreviated as a.d.
*N.B. – Four months are slightly different and have their Nones on the 7th and their Ides on the 15th. The months that follow this pattern are March, July, October and May. This rhyme is often a helpful reminder: In March, July, October, and May, the Ides are on the 15th day.

Before the Lesson: Have the students write down their birthdays. Render each date into Latin and write each one on a slip of paper. These will be handed out during the lesson.

Online Resource: Legonium Days of the Week Posters
Each issue will feature a new or popular online resource that could prove useful for Latin and Classical Studies instruction. We aim to stay current so that you can wow your students with how “with-it” you are when it comes to technology! 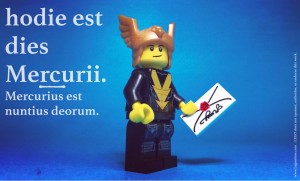 These eye-catching posters for the days of the week feature Lego figurines of the deities and short Latin descriptions of them. A seven-page pdf file is available for sale for $5 AUD (around $3 U.S. Dollars) so that the posters can be printed and displayed.

Legonium is also a very student-friendly resource for information about Roman festivals. Under the Kalends section, a webpage for each month teaches about the celebrations the Romans observed. Each festival is depicted with Legos and is explained with a very clear, two-to-three sentence caption. A printable calendar for the year is also available and would look great on a classroom wall!

Random Find:
Many items being sold today do not directly connect to Latin and Classical Studies, but with a little effort, we can adapt them to serve our purposes. This section explores these types of objects. 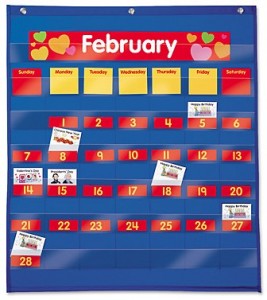 Classroom Calendar Kit from Lakeshore Learning
This nylon pocket chart comes with cards for each month of the year, the numbers 1-31, days of the week, and major holidays. It gets great reviews from preschool and elementary school teachers, but we think it would also be useful in a Latin classroom!  We like that the cards for the numbers are short, which would leave lots of room in each day pocket for a larger, square-shaped card to be visible. It would be easy to make your own square-shaped cards for the Kalends, the Nones, and the Ides. Teachers could also create cards that utilize Roman numerals and place them behind the number cards.

Featured Word: Calendar
Each issue will feature a challenging English word that we encourage you and your students to explore together. The English word will always come from one or more Latin words.

The origins of the word of the word “calendar” tell us something about its development.  The Latin word “calendarium” literally meant “a place for the Kalends” and was originally a log for accounts because debt payments were due on the first of the month, or “Kalends.”  The term “Kalends” (Kalendae in Latin) uses the letter k because the word derived from the Greek verb “kalein” (“to call”). In the early period of Greek and Roman history, the priests would “call out” each new month when the moon was new.  The term stayed on as the word for the first day of each month and reminds us of the Roman origins of our modern calendar system.

The days of the week in Latin also give us some interesting English words.  The Romans named each day after the sun, moon, and the five planets that were visible to them and all humans before telescopes were invented.  So, of course we have solar and lunar from dies solis and dies lunae. The English terms deriving from the planets sometimes end in -an and sometimes -al.  Often, the -an ending relates to the planet itself while the -al ending relates to the god behind the planet’s name or to the personality of a person born under the influence of that planet.  For example:

Famous Roman: Julius Caesar
Each issue will feature a famous individual or group from Greek or Roman history whom you may wish to explore with your students.

Gaius Julius Caesar (100-44 B.C.E.), while more famous for his roles as a general, politician, and finally a 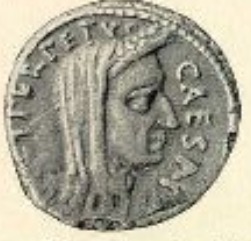 Caesar wanted to bring the Roman calendar in alignment with the solar year.  In 45 B.C.E., after consulting the astronomer Sosigenes of Alexandria who calculated the solar year as having 365 ¼ days, the Julian calendar began.  In order to account for ¼ of a day, Caesar instituted the practice of leap year, which added a 366th day every four years. 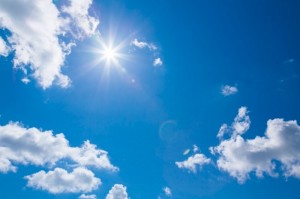