Friends, Pompeians, and Countrymen, lend me your votes…

Introduction: In this lesson, students will view examples of Pompeian election graffiti and then create their own using common Latin election abbreviations.

Background: The next time you drive past a yard sign that asks you to vote for someone, ponder this fact: You’re looking at what is essentially a 2,000-year-old practice. Like us, the ancient Romans had election signs, and Pompeii provides us with a few thousand examples. These election signs were painted directly onto the outside walls of buildings, with red or black paint and in all capital letters. Just as our modern yard signs are simple (e.g., VOTE for _____), Pompeian election graffiti also went straight to the point. The were usually formulaic and stated a person or group’s support for a particular candidate. Some interesting information on the topic (for teachers, not students), including many examples from Pompeii, can be found here at Antiquitatem.

Objectives: Students will be able to compose an election sign in Latin and explain the significance of Pompeian election graffiti.

*This lesson was adapted from a project originally designed by Abbi Holt and Cassandra Mea.

Introduction: This lesson lets students experience elements of campaigning and the voting process in Ancient Pompeii through a two-day simulation.

Background:  In this lesson, the class will elect two aedīles.  The aedīles were in charge of the city’s markets, baths, water supply, public buildings, police force, and entertainment. Students will notice that some elements of ancient elections, such as speech-making, campaign promises, and the secret ballot, are still a part of our modern election process. VRoma has a helpful introduction to Roman campaigning and voting here.

Objectives: Students will be able to describe parts of a Pompeian election, such as the speeches, campaigning, and voting.

Before this lesson begins, each student must choose a citizen name (three names) and supply it to the teacher so that the voting roll can be made.

Day 1: Speech-writing exercise and assigning roles for the simulation

Day 2: Campaigning, speeches, voting, and the announcement of the results

*This lesson was adapted from a project originally designed by Abbi Holt and Cassandra Mea.

For better or for worse, a quick glance at social media these days is guaranteed to deliver information about our current presidential election.  We tend to think of social media’s transmission of news and opinions as a sort of modern phenomenon. However, the next time you scroll through Facebook, consider another kind of scroll…a papyrus one.  This article from Brain Pickings explains how social media has its roots in the Romans’ sharing of information through a network of contacts.

Famous Roman: Quintus Tullius Cicero
Each issue will feature a famous individual or group from Greek or Roman history whom you may wish to explore with your students.

Quints Tullius Cicero was the younger brother of the famous Roman politician and orator Marcus Tullius Cicero. Quintus lived from 102 B.C. to 43 B.C. and served terms as Rome’s aedile and praetor. He never served in the chief executive role of consul like his well-known brother, Marcus, but he did give his brother campaign advice. He died during Rome’s civil war between Caesar and Pompey when he was included in a list of those proscribed as enemies of the state.

In 64 B.C., Quintus Tullius Cicero wrote a letter giving advice to his brother who was a candidate for consul. Some questions exist about the authenticity of the text, and the question of why the more famous and successful Marcus would possibly need advice from his brother is certainly interesting as well. Nevertheless, the letter gives us a glimpse into the practices of politicians in Rome’s first century B.C., practices that should sound very familiar to modern readers. For instance, Quintus advises his brother about the importance of promising all things to everyone, building an enthusiastic base of support, and reminding voters of your opponent’s scandals. The letter is available in a modern translation (plus the Latin) in Philip Freeman’s 2012 How to Win an Election: An Ancient Guide for Modern Politicians.

Random Find: chalk spray
Many items being sold today do not directly connect to Latin and Classical Studies, but with a little effort, we can adapt them to serve our purposes. This section explores these types of objects.

Would you like to create a toga candida but don’t have the time to whiten it with chalk as the Romans did? Chalk spray is the answer to this classic conundrum!

http://www.thirtyhandmadedays.com/summerfunforkids/
The blog Thirty Handmade Days has a recipe for making your own chalk spray using tempera paint, water, cornstarch, and dishwashing soap. Pour it in a spray bottle, and chalk has never been so fun!

1. Prepare a bottle of white chalk spray, and then students can spray an ordinary bedsheet in order to create a toga candida. With enough time, this idea could also be incorporated into this issue’s election simulation. (N.B. – It’s also possible to buy an aerosol can of white chalk spray.)

2. Make fun colors of chalk spray, and let students use it to write Pompeian election graffiti on a sidewalk.

Featured Words: candidate and candid
Each issue will feature a challenging English word that we encourage you and your students to explore together. The English word will always come from one or more Latin words.

At first glance, “candidate” and “candid” may seem an unlikely pair of words to be related. Both, however, are ultimately derived from the Latin verb candeō, “to be brilliant, to shine, to glitter,” the same verb which gives us our word “candle.” The men who ran for office in ancient Rome wore a special toga that had been whitened with chalk. This toga was called the toga candida, since it was such a brilliant, shining white. It is from this garment name that our word “candidate” comes.

“Candid” comes directly from candidus, “dazzling white, bright” (the adjective related to candeō). Candidus came to mean “pure, sincere, or frank,” perhaps since it referred to a single hue without the influence of other colors. Today, we call someone who openly speaks his or her mind a candid person, and we call unposed photographs candids since they are more “sincere” to the action taking place.

Students use the clues to figure out eleven election-related English words that have Latin origins. For younger students who may need help, provide them with some of the letters or give them a word bank. 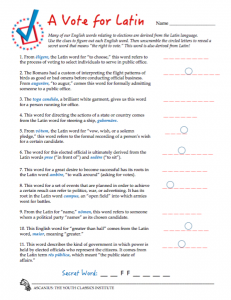 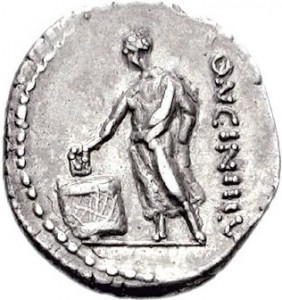