Inside this issue: Gladiatorial advertisements and emblems, Spartacus, holding your own tournament, Playmobil gladiators, and more!

Introduction: In this lesson, students will consider what they already know, or think that they know, about gladiators. They will then explore various materials on the topic and re-evaluate their knowledge about it.

Background Information: Gladiatorial fighting was very popular in Ancient Rome.  The first gladiator fight that we know of took place in 264 B.C.E. and were given in honor of a man who had died.  As the games grew in popularity, they moved from being private events at funerals to public spectacles. More permanent buildings were constructed to house them with amphitheaters being built in cities all over the Roman Empire and gladiator training schools located near the arenas.  Many gladiators were enslaved people or prisoners of war, but as the sport became more popular, more people volunteered to become gladiators.

Gladiators trained in different fighting styles which are thought to have originated from how warriors fought in different parts of the empire.  The term “gladiator” means sword fighter, but there were many variations:

Retiarii–fought with a net and trident

Samites–heavily armed with a large shield and sword

Thraeces–used a small round shield and short dagger

There are many myths about gladiators:  they didn’t generally fight against lions or other animals; they generally did not die in a match (but sometimes would die later from their wounds); the famous “thumbs up” gesture probably was an instruction to kill one’s opponent; and gladiators could become free and even very popular and rich from their victories.

Objectives: Students will be able to explain key facts about gladiators.

For this issue, we have TWO Latin lessons to share. Lessons 2 and 3 below were originally written for use in the classroom of Latin teacher and Shooting Star contributor Abbi Holt, and she has generously shared them with us here.

2. LATIN LESSON I:  Emblems and Mottoes

Introduction: In this lesson, students will design emblems for their gladiators and also write short descriptions of these emblems with the help of some composition prompts.

Objectives: Students will be able to explain the importance of symbols and will write five Latin sentences that describe themselves.

Introduction: In this lesson, students will view some examples of gladiatorial announcements and then create their own.

Objectives: Students will be able to write their own gladiatorial game announcements in Latin, using a formula.

Background Information: In Pompeii, many inscriptions have been found which advertised gladiator fights.  They were painted on walls by scribes and usually included the name of the presiding official who was funding the matches, the number of fights scheduled, and most important the time and location of the show.

Online Resource: A guide to hosting a class gladiatorial tournament
Each issue will feature a new or popular online resource that could prove useful for Latin and Classical Studies instruction. We aim to stay current so that you can wow your students with how “with-it” you are when it comes to technology!

Want to host your own tournament? Here is all that you need:
https://sites.google.com/site/latinfandom/home/gladiator-cosplay-in-latin

This extremely detailed webpage from Latin teacher and Shooting Star contributor Abbi Holt contains a wealth of information and ready-to-use resources for holding your own gladiatorial tournament.

Random Find: Paymobil Gladiators
Many items being in the world today do not directly connect to Latin and Classical Studies, but with a little effort, we can adapt them to serve our purposes. This section explores these types of items. 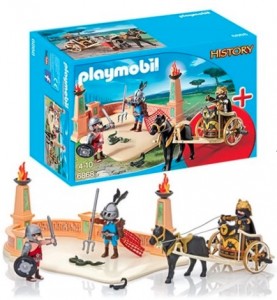 It’s no surprise that Playmobil, known for its historical play toys, would have a gladiator set. With three different gladiators, this item is sure to add some fun to any Latin classroom, whether used as decoration or for discussing the various kinds of weaponry.

Featured Words: Munificence and Remunerate
Each issue will feature a challenging English word that we encourage you and your students to explore together. The English word will always come from one or more Latin or Greek words.

The Latin word for gladiatorial contests is “munera” which is the plural of the word munus and means gifts, duties, or offerings.  How can one word mean all of these things? Understanding the history and role of gladiators in Roman life helps to explain this.  Gladiator fights began as a sacrifice in honor of a person who died and so the men who fought were gifts or offerings to the spirit of the deceased.  Later when gladiator fighting became more popular, gladiator games were “given” or funded by magistrates looking to increase their own popularity and thus became a duty of holding office.  We get the English words “munificence” (generosity) and “remunerate” (to pay someone for services) from munera.

Bonus words or What to Say at a Gladiator Fight:

If you ever find yourself at a Roman gladiatorial battle, you will need to know how to participate as part of the audience.  Here are some helpful words and phrases:

Famous Roman: Spartacus (c. 111 B.C.E.-71 C.E.)
Each issue will feature a famous individual or group from Greek or Roman history whom you may wish to explore with your students.

Spartacus was the most famous gladiator in history.  While not a Roman, he was famous for being taken to Italy as an enslaved person and made to fight as a gladiator.  He was trained at the ludus gladiatorius (gladiator school) of Lentulus Batiatus in Capua, a town south of Rome.  He fought as a murmillo which was a fighting style characterized by being heavily armed with a scutum (large oblong shield) and a gladius (sword).  We will discuss the word scutum in our next blog post, as a new shape was discovered recently by mathematicians and named after the murmillo’s shield.  From gladius, we get the word gladiator (sword fighter) and the modern plant gladiolus which resembles a sword.  Spartacus fought as a gladiator in Capua for some time until he decided he did not want to fight anymore.  He led many of the other gladiators in the school to rebel against their enslavement. Once the gladiators broke out of their gladiator school, they gathered more people for their army by liberating enslaved people in country villas.  Spartacus and his army successfully fought off the Roman army for about two years, but were eventually defeated. Spartacus remains a symbol of the fight for freedom.

Your gladiator lesson takes place at the Gladiator School of Rome, located near the Colosseum on the historic Appian Way. Specializing in the reenactment of ancient Roman life and gladiator fighting, your instructors are members of the Historic Group of Rome and will begin your class by providing you with your costume — a traditional belt, tunic, leather gloves, and a training sword known as a rudis.

Learn the basic skills of gladiator sword fighting before summoning your imagination and channeling your inner ancient Roman as you fight off ferocious lions and battle other sword-wielding gladiators. If you wish, you can participate in an optional gladiator tournament, complete with a prize for the victor. Either way, all participants receive a certificate of accomplishment at the end of your lesson.

Friends and family are allowed to watch your class from the viewing platform. Admission to the Gladiator School of Rome Museum is also included so you can check out gladiator weapons and other artifacts.

With over 780 Viator and Trip Advisor reviews and an average rating of 4.5/5, Gladiator School looks like a win!

Did your students know…?
Our modern gladiator sandals were inspired by gladiator fashion.  Tell them to think of the Romans the next time they walk through a shoe department!