Inside this issue: an introduction to many monsters of Greek mythology, a spoken-Latin game, a crossword puzzle that explores certain monsters’ influence on our modern world, the poet Ovid, a posable Cerberus statue, the word “monstrosity,” and more!  Plus, a bonus lesson featuring Pokemon!

1. LATIN LESSON: MEET THE MONSTERS AND PLAY A GAME IN LATIN!

Introduction: This lesson introduces students to thirteen monsters of Greek mythology. They will practice this new information by drawing the monsters and by playing a “Guess Who” game. Finally, they will participate in a spoken Latin game that utilizes their new mythological knowledge and also practices the question words num and nōnne.

Background: Students tend to find mythological monsters interesting, perhaps because the topic appeals to our imagination and creativity, or perhaps because the stories are just so much fun. Teachers and advanced students may be interested in this commentary, which discusses the way monsters were imagined.

Objectives: Students will be able to tell basic features and information about certain mythological monsters. They will also be able to ask questions in Latin using the question words num and nōnne.

Special Concerns: Students may need more practice with the information about the monsters before tackling a game in Latin. If necessary, the spoken Latin game could certainly be played in English before being played in Latin.

Introduction: This lesson explores many examples of how the monsters of Greek mythology have influenced our modern world. Students will complete a printed crossword puzzle while looking at an online slide show for the clues. N.B. – This lesson focuses on the same thirteen monsters as the Latin lesson above.

Background: Like so many aspects of the Classical world, the monsters of Greek mythology have influenced numerous areas of our modern world. From animal names to business names, there is much to explore here!

Objectives: Students will be able to explain how specific monsters from Greek mythology have loaned their names or features to various animals, characters, businesses, or words in our modern world.

Special Concerns: Teachers may wish to use this issue’s Latin lesson (above) first to introduce the monsters before students tackle this puzzle. In addition, younger students could benefit from using the Latin lesson’s “Monsters of Greek Mythology” handout as a guide while working on the puzzle.

This extremely detailed website provides excellent information about each monster, and images are included as well. Perhaps one of the best and most helpful features for each monster is the section with quotations from classical literature.  Teachers and students can easily see what various authors had to say about each monster.
N.B. – The bestiary is only a part of Theoi’s website. All areas of Greek mythology can be found there!

Famous Roman: Publius Ovidius Naso
Each issue will feature a famous individual or group from Greek or Roman history whom you may wish to explore with your students.

Students might ask, “How do we know these myths from such a long time ago?”  It’s a great question, especially since the earliest myths were most likely handed down orally by storytelling. Eventually, Greek writers such as Homer, Hesiod, and others produced works of literature which have allowed us to enjoy these stories thousands of years later.

In Roman times, the poet Publius Ovidius Naso (commonly called Ovid today) composed the Metamorphoses, a collection of hundreds of myths written in poetic meter. Most of the stories include a transformation of some kind, hence the title of the work. The Metamorphoses has had nearly unrivaled influence on Western literature and art through the ages, and for some myths it is our sole surviving source.

Ovid lived from 43 B.C. to A.D. 17 during the reign of Rome’s first emperor, Augustus, and he was popular in his own time. In addition to the Metamorphoses, Ovid was known for his love poetry. He wrote many other collections, but two of his most famous are the Amores and the Ars Amatoria. The Amores was poetic account of a romantic relationship with a girl named Corinna. The Ars Amatoria was a guide telling men how to find and keep a girlfriend. In the end, Ovid’s life proved to be quite interesting as well. In A.D. 8, Ovid was sent into exile by the Emperor Augustus, and he lived out the rest of his days near the Black Sea. Ovid writes that he was sent away as a result of “carmen et error” (a poem and a mistake). Despite many scholars’ speculations, the details remain a mystery to us!

Random Find: The “Handitaur” and  Posable Cerberus in a Can
Many items being sold today do not directly connect to Latin and Classical Studies, but with a little effort, we can adapt them to serve our purposes. This section explores these types of objects.

When faced with two truly random finds this month, we couldn’t choose just one!  The “Handitaur” is a finger puppet that “transforms your hand into a centaur.”  It is quite affordable at just $7.95 online at Archie McPhee. If you’re looking for something more realistic, and you have a bit more to spend, then the Cerberus in a Can 3D Print Taxidermy Posable Figure may be for you! Available from MythicArticulations on Etsy for $85.00, this Cerberus skeleton stands at five inches tall and can be posed in a variety of ways. 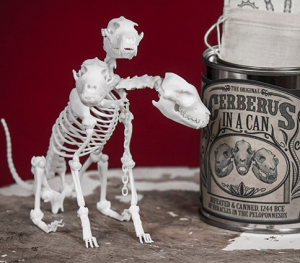 1. The Handitaur could be used in class skits, whether on the topic of mythology or not. He could become a sort of classroom celebrity who makes cameo appearances in all kinds of skits, or he could be used as a narrator.

2. Cerberus, true to his story, would be the perfect guard dog for the teacher’s desk!  However, why not make use of his posable nature to help make Latin composition a little more fun? Students could pose Cerberus in front of some different backgrounds or scenes for a photoshoot. Then they could do creative Latin compositions based on the resulting photos.

Featured Word: monstrosity
Each issue will feature a challenging English word that we encourage you and your students to explore together. The English word will always come from one or more Latin words.

Watch out! Did you know that our words “monster” and “monstrosity” are related to the Latin verb that meant “to warn?”  Yes, it’s true!  Both of those words are clearly derived from the Latin word for monster, “monstrum.” However, by looking a little further, we can see that the noun “monstrum” is derived from the Latin verb “monere,” which means “to warn.”  How are these two words connected?  Since a deformed sacrificial animal would be considered a warning from the gods, a “monstrum” was originally an evil omen, something that communicated a divine warning.

Our English word “monstrosity” is a noun that means something huge and ugly. A monstrosity differs from the norm, just as a monster is different from normal animals. It often refers to a huge or ugly building that is out of place among its surroundings. For example: The inhabitants of the charming, colonial-style town considered the new ten-story office building a monstrosity.

Introduction: For better or for worse, the Pokemon “epidemic” is here to stay. Believe it or not, the sentence you just read introduced a lesson that was used in our very first LatinSummer program in 2000! Who would have guessed it would still be true sixteen years later?

This updated version of that original lesson makes use of the widespread enthusiasm about Pokemon in order to teach Latin and Greek root words that are commonly used in English. Further, this activity not only gives students the opportunity not only to express themselves creatively. It also allows them to actively explore root words by naming and creating a Pokemon character of their own.

Objectives: Students will be able to explain the connections between a Pokemon character’s name (for those based on Latin or Greek roots) and its features. 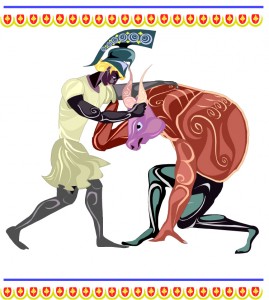