This month we’ll explore Roman Britain. Inside this issue: the famous Vindolanda tablets and an infinitives composition activity, a webquest about forts in Roman Britain, the warrior queen Boudicca, sand castle molds, and more!

I. LATIN: THE VINDOLANDA TABLETS AND AN INFINITIVES COMPOSITION

Introduction: In this lesson, students examine the Vindolanda tablets for their archaeological significance, and they are also introduced to Roman cursive. They then make their own tablets, composing sentences about themselves in Latin for their classmates to read.

Background: The Vindolanda tablets are writing tablets which were found at the site of a Roman fort at Vindolanda in the northern part of England. They are made of very thin wood, were written on with ink, and most likely date to the early second century A.D.  They were used not only for keeping military records, but also for personal messages among the Romans living there.  The tablets tell us about daily life in Roman Britain. Some interesting insights into daily life include a birthday party invitation (Tablet 291) and also a list of clothing that includes socks and underwear (Tablet 346). Some good introductory information about Vindolanda can be found at http://www.vindolanda.com/roman-vindolanda.

Objectives: Students will be able to describe the significance of the Vindolanda tablets. They will also compose sentences with infinitives and impersonal verbs in order to discuss activities they like to do.

Special Concerns: During the composition portion of this lesson, beginning students can stick to the composition guide, but more advanced students should feel free to add additional sentences with vocabulary and constructions of their choice.  This will, of course, give the advanced students more of a challenge and make their tablets more interesting for the other groups to read!

II. THE GEOGRAPHY AND ARCHAEOLOGICAL SITES OF ROMAN BRITAIN

Introduction: This lesson draws on a couple of very good websites to guide students through an exploration of Roman Britain.

Background: The Romans occupied Britain in 43 AD and radically changed its landscape over the 300 plus years they occupied the island.

Objectives: Students will be able to to describe the geography of Roman Britain and some of its archaeological sites.

Each issue will feature a new or popular online resource that could prove useful for Latin and Classical Studies instruction. We aim to stay current so that you can wow your students with how “with-it” you are when it comes to technology!

This issue, we want to share with you a kid-friendly, funny video titled “A Day in the Life of a 10 year-old in Roman Britain.”  It centers on a boy whose imagination brings him back in time to a villa in Britain.  He explores the food, house layout, and cultural practices of the time, often finding himself in awkward or silly situations.  This will be a hit with young children and for will provide a light-hearted review of Roman daily life in Britain for older children.

Each issue will feature a famous individual or group from Greek or Roman history whom you may wish to explore with your students. 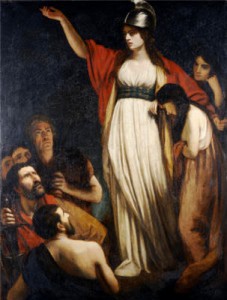 Boudicca was a powerful British queen of the Iceni tribe who led a revolt against the Romans in 60 AD when Romans took control of her tribe’s lands.  Following the death of her husband Prasutagus, her wealth had been left to their daughters and to the emperor Nero.  Prasutagus had hoped that this favor would assure the Roman empire’s protection.  Instead, the Romans began to exploit the Iceni people through annexation and plundering.  Boudicca allied the Iceni with other British tribes and burned several key Roman cities in Britain, including Londinium (modern day London).  From 60-61 C.E., Boudicca fought bravely and left many Roman towns in ruins, but ultimately lost the war and took her own life.  After some staggering defeats and Roman victory, Boudicca killed herself by drinking poison.

These are sand-building molds of the Colosseum and the Parthenon, along with some other random sand-castle toys. 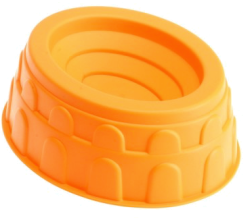 In Lesson 1 above, students practiced “transcribing” their names and other words into the Roman cursive alphabet. Similarly, the scholars who first worked on the Vindolanda tablets had to “transcribe” the Roman cursive into our modern letters of the alphabet before they could read the Latin words on them. Ask students if they can deduce the meaning of transcribe from the Latin words “trāns” and “scrībere,” and help them to understand how transcribe literally means “to write across.”

In addition to writing something out in another language or alphabet, transcribe has some other meanings. It can mean to make a written copy of something that was first spoken, such as a lecture or a radio recording. In music, it means to set up a composition so that it can be played on an instrument for which it was not originally intended.

Q: What are some additional resources that can be used to teach about Roman Britain?

A: Minimus: Starting Out in Latin is a textbook which has long been praised for its approachable and engaging method of teaching the youngest Latin learners.  The book centers on the life of a mouse who lives with a family in Roman Britain.  The story and illustrations are based on archaeological finds, authentic Latin texts, and historical research related to the Roman fort in northern Britain named Vindolanda.  Ascanius uses Minimus with its “Let’s Learn Latin!” workshops for teachers who would like to explore Latin and learn how to use it with their students. In addition, when The Shooting Star contributor Skye Shirley used the book to teach homeschoolers, she was impressed by its layout and historical connections, and finds it a helpful resource for young age groups.

The Roman Baths Museum in England

The Boudicca Song (taken from Horrible Histories and if you own them, it’s well worth it it use their version) Lyrics are here.

Link to the archaeological report from Inchtuthil, a very well preserved and well excavated Roman fortress. 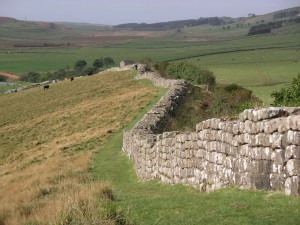