Gobble till you wobble…

Introduction: In this lesson, students will learn the Latin words for 20 different foods and practice them using two conversational activities.

Background: All of the foods in this activity were available and frequently eaten in Ancient Rome. The Roman diet was largely centered around what is called the “Mediterranean Triad.” Archaeologists use this term to refer to three main staples: grain, olive oil, and grapes (for wine). Students will be interested to learn that many of their own favorite foods, such as chocolate and potatoes, were unknown to the Romans.

Objectives: Students will be able to name the Latin words for many foods commonly eaten by the Romans, and to use these words as direct objects in a Latin sentence.

Special Concerns: In the card game, younger students do not have to say the entire sentence in Latin. They can just say the Latin word in the Nominative Case.

Introduction: In this lesson, students will design a plan for their own modern restaurant that serves Ancient Roman cuisine.

Background: While many of the Romans’ foods are familiar to us as well (e.g., fruits, vegetables, bread, etc.), some of their dishes strike the modern eater as unusual, if not downright unappetizing. For example, dormice were considered a delicacy and could be served stuffed or rolled in honey! Students will enjoy the challenge of planning a restaurant that serves such exotic foods.

Objectives: Students will use their knowledge of Roman food and dining to make creative plans for a restaurant.

If you would like to try eating as the Romans did, then the “Pass the Garum” blog is a great place to start!  The author experiments with various ancient Roman recipes and provides measurements and instructions so that you can make them, too.

Famous Roman: Marcus Gavius Apicius
Each issue will feature a famous individual or group from Greek or Roman history whom you may wish to explore with your students.

Our only surviving cookbook in Latin (De Re Coquinaria) is attributed (perhaps falsely) to a man named Marcius Gavius Apicius, who lived sometime in the 1st century A.D.  Not much is known about this Apicius, but he had the reputation of being a lover of good food.  Even today, there is a world-famous cooking and hospitality school named after him. The cookbook that is attributed to Apicius contains a treasure-trove of information about Roman food which includes actual recipes. You can try to make some of the recipes directly from an Apicius recipe, but because the recipes do not include specific measurements of ingredients, it can be difficult to end up with an edible final creation.  Luckily, many people have tested the recipes of Apicius and have modified them with modern measurements and ingredients.

The text of Apicius is available from Gutenberg Project or at http://penelope.uchicago.edu/Thayer/E/Roman/Texts/Apicius/home.html

Random Find: a modern garum and Roman coin replicas
Many items being sold today do not directly connect to Latin and Classical Studies, but with a little effort, we can adapt them to serve our purposes. This section explores these types of objects.

We have two random finds to share this month. The first may not be as appealing to everyone, which is the reason we have provided a second! 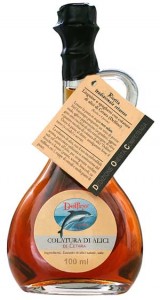 Have you ever wanted to find out what the Romans’ fish sauce tasted like?  Now you can!  For around $15, you can order a bottle of the modern-day version, colatura di alici.

This set of five true-to-size replica Roman coins is a great addition to the Latin classroom. Perhaps after viewing them, students could attempt to make their own replicas out of clay and then use them in the In Tabernā dialogue in Lesson 1 above.

Featured Words: companion
Each issue will feature a challenging English word that we encourage you and your students to explore together. The English word will always come from one or more Latin words. 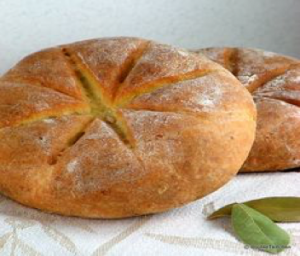 Encourage students to think of other connections to “pānis” as well. For instance, ask them to name a restaurant known for its bread and baked goods (Panera).  They might also mention Panem, the name of the fictional nation in The Hunger Games series. Panem is short for pānem et circensēs, a phrase coined by the Roman author Juvenal to describe the way the people of Rome were kept controlled and content by means of free bread and entertainment. Ask students if they can guess why Suzanne Collins chose to use that name for the setting of The Hunger Games.

Ascanius offers two publications which are useful for learning about Roman foods:

Remember, as an Ascanius member, you receive a 10% discount on our publications!

Also, if you are interested in trying out some Roman recipes or perhaps even holding a class banquet with Roman foods, you might check out these cookbooks:

A Taste of Ancient Rome, by Ilaria Gozzini Giacosa

The Classical Cookbook, by Andrew Dalby and Sally Grainger
*The Ascanius staff once used this one for a Roman banquet at LatinSummer, and the recipes worked well! 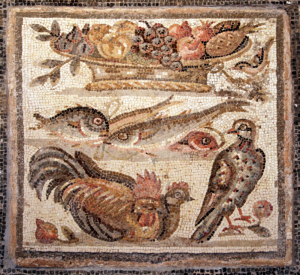