This month, we explore houses in Latin and the Roman world. Inside this issue: a Roman house board game, a game of twister, the emperor Nero, Easter eggs, and more!

I. LATIN: A ROMAN HOUSE BOARD GAME

Background: Students will learn the rooms of a house and preposition cases by moving board game pieces through rooms in a Roman house.

Introduction: The goal of this game is to be the first player to visit every room of the Roman house in the prescribed order. All players begin outside in the street and need to form sentences using Latin prepositions in order to move through the rooms.

Objectives: Students will learn the names and functions of each room in a Roman house. Students will also practice 1st person singular verbs and will master the cases of prepositions.

Special Concerns: This game can be adapted for many levels of difficulty by removing or adding information to the game board and cards. It could be suitable for elementary students as well as middle and high school students. Also, it should be noted that the rooms are 1st and 2nd declension words, so additional activities would be needed for students to form other declensions in the accusative and ablatives.

Introduction: Students will learn the location of the rooms of a Roman house by playing a “Roman House” themed “Twister” game.

Special Concerns: This activity is best for young students or small groups of older students because students will be so physically close to each other on the game board. Also, some students may not know how to use class time wisely when they get “out” during this game. Therefore, it would be ideal for the teacher to have another fun activity or a separate location for students to go to when they “get out.”

Objectives: Students will master the names and locations of rooms of the Roman house through a kinesthetic activity.

Online Resource: Virtual Tour of a Roman House
Each issue will feature a new or popular online resource that could prove useful for Latin and Classical Studies instruction. We aim to stay current so that you can wow your students with how “with-it” you are when it comes to technology!

This website provides an engaging virtual tour of a Roman house, complete with room furnishings. Students can also play the video without sound and narrate the name of the room and its function to review for a quiz or prepare for one of the games outlined above.

Famous Romans: The Emperor Nero and his Golden House
Each issue will feature a famous individual from Greek or Roman history whom you may wish to explore with your students.

Nero was emperor of Rome from 54 to 68 A.D. He spent lavishly and was a tyrannical ruler. He is perhaps best known to students as the emperor who ruled during the Great Fire of 64 A.D.; however, your students might not know that he also built a huge palace known as the Domus Aurea, the Golden House.

Nero built this palace on land that had been cleared in the Great Fire. Some Romans even thought that he might have allowed the fire to spread so that it would create more space for the palace! It covered a huge amount of land. In fact, some historians estimate that the palace and grounds covered a space of up to 300 acres. It was called the Golden House because it was so ornately decorated, with parts of it including gems, seashells, and gold leaf overlays. In addition, gorgeous frescoes decorated many of the walls, and the dining rooms had ceilings of ivory. There was even a statue of Nero 120 feet tall and a colonnade one mile long! Upon seeing his completed palace, Nero is said to have declared, “Finally I can live like a human being!”

Although much of the palace has been destroyed, you can still visit the Domus Aurea in Rome today. In fact, it has recently reopened to tourists for the first time since 2005.

Random Find: Easter Eggs
Many items being sold today do not directly connect to Latin and Classical Studies, but with a little effort, we can adapt them to serve our purposes. This section explores these types of objects.

How we found them: Do you have plastic Easter eggs left over from the holiday? These props can be used for a variety of lessons! Shooting Star writer Skye Shirley has used these in her seventh grade classroom, and students are always excited to find the eggs scattered about the room when they enter!

Possibility #1: Use the eggs for a paired activity to review the Roman house. Each pair of students could be given several plastic eggs. The students work together to write a different Roman house room name on each egg. Then, they create a small drawing of each room on a little piece of paper to go inside each respective egg. After this review work is done, the students can use the eggs to quiz themselves on the purpose of each room. They look at the outside of the egg for the room name, and then open up the egg to see if they are correct about its use. It’s a fun alternative to flashcards!

Possibility #2: Play an egg-hiding game to practice rooms of the Roman house. Students can make a large floorplan of a Roman house, using multiple large pieces of chart paper or a shower curtain. Then, they put a plastic Easter egg in one of the rooms while a student who is “it” closes his eyes. “It” guesses where the egg is by asking questions such as, “Estne ovum in triclinio?” The other students respond with “Sic” or “Minime.” Finally, “it” opens his or her eyes and sees the egg.

Possibility #3: Reinforce animal vocabulary and practice forming diminutives. In Skye Shirley’s class, students learn animal names early on, and spring provides a perfect opportunity to reinforce animal vocabulary and practice adding the diminutive -ulus or -ulaending to Latin words (for example, making a wolf, lupus, diminutive by calling him a “little wolf,” “lupulus”). To prepare for this lesson, download the “Baby Animals” document and cut out the animals, placing one inside of each egg. Hide the eggs throughout the room or give one to each student and have them open them one by one, so that each student shows hers to the class. As the students open their eggs, they can fill out the “In Ovo Meo” sheet.

Featured Words: domestic/domesticated
Each issue will feature a challenging English word that we encourage you and your students to explore together. The English word will always come from one or more Latin words.

Domus, the Latin word for “house,” provides us with several English derivatives which will be useful for students. Have students brainstorm words that have dom- in front, and explain their definitions. Some examples include domestic, domicile, dominion, and dome. In addition, students may have heard words like domestic before but might not be aware of terms like “domestic policy.”

Advice & Questions:
Q: Where can I find modern examples of Roman house layouts?

A: The Boston Public Library has a very clear courtyard with a colonnade, so visiting it or viewing pictures can help students to understand what a Roman house’s peristylum would look like. In addition, the design of the Getty Villa in California was based on the Villa of the Papyri in Herculaneum. Encourage your students to be on the lookout for modern examples of Roman house layouts in their own communities. If you email us a picture and description of what they find (at marketing@ascaniusyci.org), it could be included in the next issue of The Shooting Star for all to see! 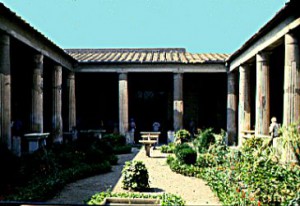