This month we’re taking a look at Roman religion. Inside this issue: a Roman religion board game, a lesson in augury, a bonus lesson on the gods and goddesses, the words “inaugural” and “auspicious,” and more!

Special Bonus Feature: Introduction to the Gods and Goddesses

As our New Year’s gift to you, we’re sharing with you a special bonus lesson!  This Introduction to the Gods and Goddesses is a selection from our popular Mingle with Myth publication and can be used to teach students some basic information about the deities. It includes:

Students who are unfamiliar with the gods and goddesses may wish to explore this lesson first before proceeding to the other lessons in this issue. Happy New Year!

I. ROMAN RELIGION BOARD GAME

Background: The Romans’ relationship with their gods was quite contractual in nature.  They offered sacrifices to their gods with the expectation that the gods would return the favor in useful ways.  They even had a religious formula, “do ut des,” (“I give in order that you give”) which expressed this quid pro quo idea.

Introduction: This lesson uses a “Chutes and Ladders” type of board game to help students explore some ways that the Romans believed the gods could have a positive or negative effect on their lives.

Objectives: After this lesson, students will be able to give some examples of ways that the Romans believed their gods could affect their lives as a result of the contractual nature of Roman religion.

Special Concerns: Some groups, especially older students, might finish the game very quickly. In this case, encourage them to play the game a couple of times so that they encounter all of the positive and negative events on the game board.

II. LATIN: A LESSON IN AUGURY

Introduction: Romans didn’t do anything of importance without consulting the auspices, or omens in the sky.  If they saw anything that seemed to suggest bad things were ahead, they would wait for another day to proceed. The lesson guides student through the process of taking the auspices with as much authenticity as possible.

Background: Ex avibus. It was only a few birds which could give auguries among the Romans (Cic. de Div. II.34). They were divided into two classes: Oscines, those which gave auguries by singing, or their voice, and Alites, those which gave auguries by their flight. To the former class, belonged the raven (corvus), the crow (cornix), the owl (noctua, Festus,s.v. Oscines), and the hen (gallina, Cic. de Div. II.26). To the aves alites belonged first of all the eagle (aquila), who is called pre-eminently the bird of Jupiter (Jovis ales), and next the vulture (vultur). (from A Dictionary of Greek and Roman Antiquities by William Smith, 1859 – available on Google Books)

Objectives: To teach students about one of the central rituals of Roman religion and have them practice forming the accusative case and numbers.

The second person says: “I am silent. I ask the gods, please, that it comes to me by taking the auspices what may be good and fortunate for me.” “TACEO. DEOS QUAESO IN MIHI EVENIAT QUOD BONAM ATQUE FORTUNATUM SIT MIHI.”   (This script comes from http://www.societasviaromana.net/Collegium_Religionis/taking_the_auspices.php.)

N.B. – For students who may need assistance writing the birds’ names in the Accusative Case on the handout, here is a guide (listing the singular and then the plural forms) which teachers can share:

Each issue will feature a new or popular online resource that could prove useful for Latin and Classical Studies instruction. We aim to stay current so that you can wow your students with how “with-it” you are when it comes to technology!

Video Introduction to the Greek Gods
https://www.youtube.com/watch?v=FyT3A4vi6cw
This four-minute cartoon provides a simple introduction to major gods and goddesses. The names used are Greek names. For a guide that includes Roman names, see the Mingle with Myth materials provided at the beginning of this issue.

NPR’s “Have a PC Holiday Roman Style”
http://www.npr.org/templates/story/story.php?storyId=5060356
In this three-minute tongue-in-cheek NPR recording, an essayist imagines what a Roman might have thought of the increasingly diverse religious practices of the Roman empire.

Each issue will feature a famous individual or group from Greek or Roman history whom you may wish to explore with your students. 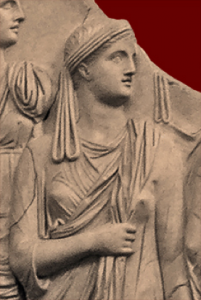 One of the most fascinating religious groups in Ancient Rome was the cult of the Vestal Virgins. They were six priestesses who were in charge of tending the sacred fire in the Temple of Vesta. Great importance was attached to this fire: Romans felt that if it was allowed to be extinguished, it meant that the goddess Vesta would take away her protection from the city. A Vestal Virgin who allowed the fire to go out would be punished with a beating.

The priestesses were chosen between the ages of six and ten and served for thirty years. They lived in the House of the Vestal Virgins near the characteristically round Temple of Vesta in the Roman Forum. During their entire thirty years of service, they were required to remain celibate. Failure to maintain that vow would result in the punishment of being buried alive! However, the Vestals did enjoy great respect and honors not given to other women. They were given a seat of honor at public events, and they were allowed to own property.

Cardtamen is a card game which involves cards about people and places. Players must use their knowledge about a certain card in order to make an argument as to why the card should win a controversy selected by the roll of a die. We recommend the “junior” edition to start, and then if students want a challenge they can take on the other expansion packs.

How we found them: They were being sold at the MAFLA conference.

Possibility #1: The Shooting Star writer Skye Shirley played this game with her Classical Club students, and they loved it!  The students got very excited about debating the merits of gods and goddesses!

Possibility #2: One student proposed that we add other, more goofy prompts, such as “Most annoying” or “Funniest.”  Additionally, teachers could have students make their own cards by writing the descriptions of the characters, buildings, or events in Latin.

In this issue, the Latin lesson dealt with the practice of augury, in which priests called augurs interpreted the flight patterns of birds in order to determine the will of the gods. From this Latin word, augur, comes our English word, inaugural, an adjective which means initial, first, or marking the beginning of a new venture, series, etc. Ask students if they can figure out why inaugural refers to a beginning, and help them to make the connection that augury had to be performed before any official Roman state business could begin.

Another English word that also stems from the Roman practice of augury is auspicious, which comes from the Latin word, auspicium, “divination by birds.”  Auspicious means favorable, or promising or suggesting success. For example, someone who finds an unexpected $20 bill in an old coat pocket on January 1 might consider that to be an auspicious start to the year!

Q: Where can I find more lessons about the gods and mythology?

A: Ascanius offers an entire publication focused on mythology, called Mingle with Myth, which contains 124 pages of lessons and activities in Classical art and mythology. These activities are designed especially for students in grades three through seven. The topics include: 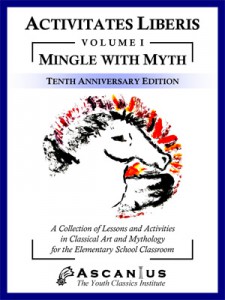 More details can be found in the Publications section of our website: http://www.ascaniusyci.org/store/index.htm

Remember: As an Ascanius member, you receive a 10% discount on publications! 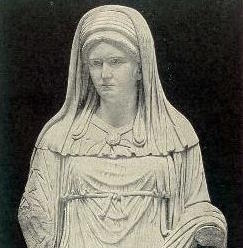