All Roads Lead to Rome!

Inside this issue: A Roman road trip board game, Candy Roman road models, the Roman Appius Claudius Caecus, the word “via,” and more!

Introduction: In this lesson, students will gain insight into the Roman Empire’s network of roads by examining a high-interest, subway-style map. Sasha Trubetskoy, a self-described “geography and data nerd,” showcases his many map creations on his website. His subway-style diagram of the Roman Empire’s roads is sure to instantly grab student’s attention, and its colorful style makes it well suited for an educational board game.

Background: One of the greatest achievements of the Romans was their vast system of well-constructed roads. The roads were first built by the Roman army so that they could move more efficiently and quickly as they marched from place to place. Over time, the roads came to be used by all kinds of travelers, and by the time of the Empire there were around 50,000 miles of roads.

Objectives: Students will be able to name several major Roman roads and to explain the significant impact that the Romans’ roads had on their world. 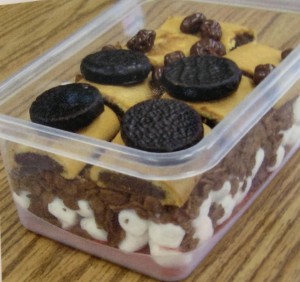 Introduction: In this lesson, students will learn about the layers of a Roman road, and they will construct models that demonstrate how these layers made the roads so sturdy. This activity has a long history in the programs of Ascanius, and we are excited to share it here!
Background: Roman roads were built to last! The construction of a road involved filling a ditch with various layers of sand, gravel, and stones. The specific layers and the order seem to have varied from place to place, depending on which materials were available. In this model, we will fill our ditch with sand, followed by large rocks, small rocks (which fill in the gaps), and large flat slabs (the top surface).

Objectives: Students will be able to follow directions in Latin in order to construct a candy Roman road. They will also be able to list the layers that comprised a Roman road.

Special Concerns: Classes with less of a background in Latin could do the activity in English without using the Latin script.

***For teachers with older students: It can also be fun to teach the class about the layers of the road but then have the students determine which edible items could be used to represent each layer. The class can be divided into groups who must then bring in their own road construction materials on a certain day designated for road-building. (The teacher just provides the Tupperware ditch!) Each model road will be unique, and prizes can be awarded for most creative, best tasting, and so on!

Online Resource: Stanford’s ORBIS
Each issue will feature a new or popular online resource that could prove useful for Latin and Classical Studies instruction. We aim to stay current so that you can wow your students with how “with-it” you are when it comes to technology!

The ORBIS online tool is like a Mapquest for the Roman Empire. Users can create routes from one city to another and select options such as season and method of transportation. The website is extremely detailed and includes a long list of cities from which to choose. Students could learn a lot from exploring ORBIS and will find it especially helpful in answering questions about how long it would have taken the Romans to travel from place to place.

Featured Word: “Via”
Each issue will feature a challenging English word that we encourage you and your students to explore together. The English word will always come from one or more Latin words.

“Via” is one of those Latin words that has been adopted by the English language and continues to be used in common language today. It was Latin’s word for “road,” or “way,” as in the “Appian Way.”  Today, we use it to mean by way of, as in, “She’s flying to St. Louis via Chicago.” It can also mean by means of, such as,”This afternoon I will pick up my child via the car line,” or “In the Roman Road Trip Board Game, I reached my destination by traveling via sea.”

In addition, “via” provides us with a number of English words, including convey, deviate, obvious, viaduct, and voyage. One of the most interesting words from “via” is trivia. The Latin word “trivium” meant a crossroads, literally a place where three (tri-) roads met. Eventually, an adjective, “trivialis,” came to describe something that is found everywhere or is commonplace, like a crossroads, which has the sense of public or common. Thus, “trivia” is common, everyday knowledge.

Famous Roman: Appius Claudius Caecus
Each issue will feature a famous individual or group from Greek or Roman history whom you may wish to explore with your students. 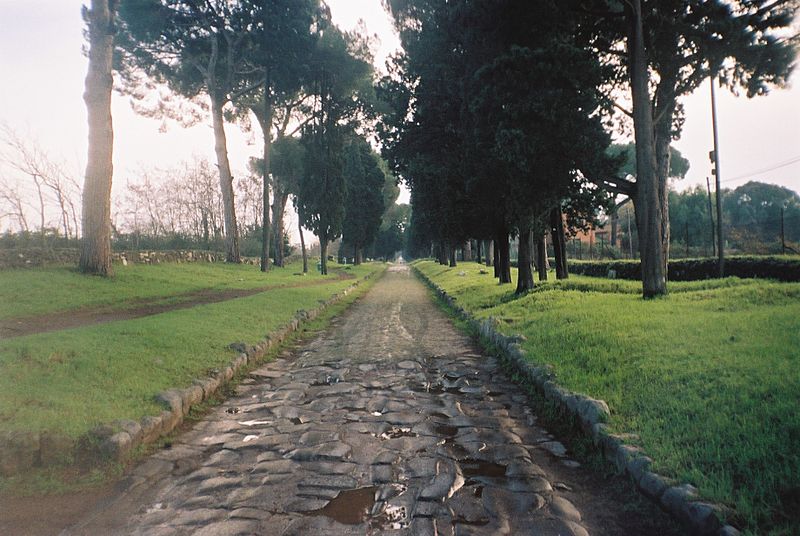 Appius Claudius Caecus was the Roman censor who was responsible for the construction of one of one of the most famous Roman roads. The Via Appia, or Appian Way, begun in 312 B.C., was named after him. It stretched from the city of Rome to the city of Brundisium on Italy’s southeast coast. The road became important for travel and trade, since it led to the seaports from which ships would travel to and from Greece and other eastern parts of the Mediterranean. The writer Statius even referred to the Appian Way as longarum regina viarum, “the queen of long roads.”

Appius Claudius Caecus lived in a rather early part of Rome’s Republic period, but historians know some details about his life. Although he was a patrician, he attempt political reforms that benefitted freedmen’s sons and non-landowners. He was also responsible for the completion of Rome’s first aqueduct, which was then named after him. (VRoma provides an interesting summary of why the aqueduct came to be named for Appius Claudius Caecus, rather than for his colleague, who had begun the project.) In his older years, Appius Claudius was affected by blindness and so earned the cognomen Caecus, “blind.”

Random Find: Picture Books about Modern Road Construction
Many items being sold today do not directly connect to Latin and Classical Studies, but with a little effort, we can adapt them to serve our purposes. This section explores these types of objects. 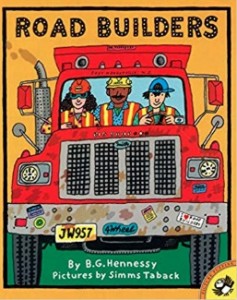 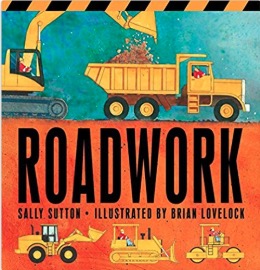 Both of these picture books introduce the people, the machines, and the steps involved in the process of building a modern road. We found them because Kristen Bortner, editor of The Shooting Star, is always looking for new picture books for her young children.

All Roads Lead to Rome!

Do all roads really lead to Rome? Well, they can in Europe! The interactive map, Roads to Rome, displays almost 500,000 routes that can lead to Rome from various European starting points. 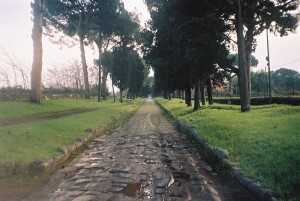