Inside this issue: The story of Romulus and Remus in English and in Latin, the author Livy, an online storyboard resource, the word “palatial,” and more!

1. CULTURE LESSON: THE STORY OF ROMULUS AND REMUS

Introduction: In this lesson, students will learn the story of Romulus and Remus and will practice ordering the events of the story in English or in Latin.

Background: The traditional founding date of Rome is April 21, 753 B.C., but the story of Rome’s founding actually begins many years before then. There was a king named Proca, who had two sons, Numitor and Amulius. The older of the two was Numitor, and so he was the heir to the throne. However, when it came time for Numitor to become king, his brother Amulius violently drove him away and seized the kingdom for himself. Amulius then murdered his brother’s sons and appointed the daughter, Rhea Silvia, as a Vestal Virgin. The Vestals were priestesses who were not permitted to marry or have children. By giving her this honor, Amulius intended to prevent her from having children who might threaten his power. However, Rhea Silvia gave birth to twin boys and claimed Mars was their father. Amulius worried that these boys might grow up to threaten his power, and so he ordered that they be killed. This is where our story begins…

Objectives: Students will be able to retell the story of Romulus and Remus by re-ordering cards which tell the story in English or in Latin.

Special Concerns: Classes with less Latin experience can use the English slideshow. They could also attempt the Latin version after using the English one.

2. LATIN LESSON: A LATIN READING AND A STORYBOARD

In celebration of Rome’s birthday, we are sharing with you this Romulus and Remus lesson from our Leap into Latin publication. This lesson guides students through a Latin reading about the founding of Rome and includes:

We’ve also added a crossword puzzle (and key) which can be used as a follow-up activity.  Students can test their knowledge of the underlined Latin words from the reading.

Online Resource: Storyboard That
Each issue will feature a new or popular online resource that could prove useful for Latin and Classical Studies instruction. We aim to stay current so that you can wow your students with how “with-it” you are when it comes to technology!

Storyboard That is an online storyboard creator. Students must create an account, but it is free to use. It provides a wide range of options while maintaining a user-friendly design. Not only are there many different characters from which to choose (including Classical era and mythological characters), but the poses and expressions are simple to customize. Storyboard That would be a great choice for students who would like to use an online tool to create the storyboard in Lesson 2 above!

Famous Roman: Titus Livius
Each issue will feature a famous individual or group from Greek or Roman history whom you may wish to explore with your students.

Titus Livius (“Livy”) was one of ancient Rome’s most famous historians.  His magnum opus or masterpiece was the “Ab Urbe Condita Libri” or books from the Founding of the City.  In it, he traced Rome’s history from the very beginning in 753 B.C. to the death of Augustus in 14 A.D.  Livy lived from about 64 B.C. to 17 A.D., which is about the same time period of Augustus’ life, who lived from 63 B.C. to 14 A.D. Fun fact: the ancient Romans sometimes dated their years “from the founding of the city” and used the abbreviation “a.u.c.” (ab urbe condita) to indicate how many years an event took place after Rome’s founding.

Many of the stories we have about Rome’s early period (the monarchy and the early Republic) come from the works of Livy.  These stories are “legends” in that they are based in history, but have elements that are supernatural or not factual in other ways.  The traditional date for the founding of Rome (April 21, 753 B.C.), for instance, is a plausible date, but most likely not the actual month, day, and year of the first human settlement in the area we now call Rome.  There is archaeological evidence from the mid-8th century B.C. of shepherds’ huts, but archaeologists cannot date the settlements any more precisely. It’s quite possible that the founder or an early leader of Rome was named “Romulus” but we cannot be certain. Which parts of the Romulus and Remus story do you think are factual and which do you think were added to make the story more entertaining or meaningful to the Romans?

Random Find: Easter Eggs
Many items being sold today do not directly connect to Latin and Classical Studies, but with a little effort, we can adapt them to serve our purposes. This section explores these types of objects.

Don’t throw away your plastic Easter eggs!  They can be used in the Latin classroom!

1. Hold a vocabulary egg hunt. Print a page listing Latin vocabulary words and their English translations. Cut out the words, and place one word in each egg. Hide the eggs in the classroom, hallway, or outdoor area, and then have students search for each match. When they find two matching eggs, they earn candy or some other prize. 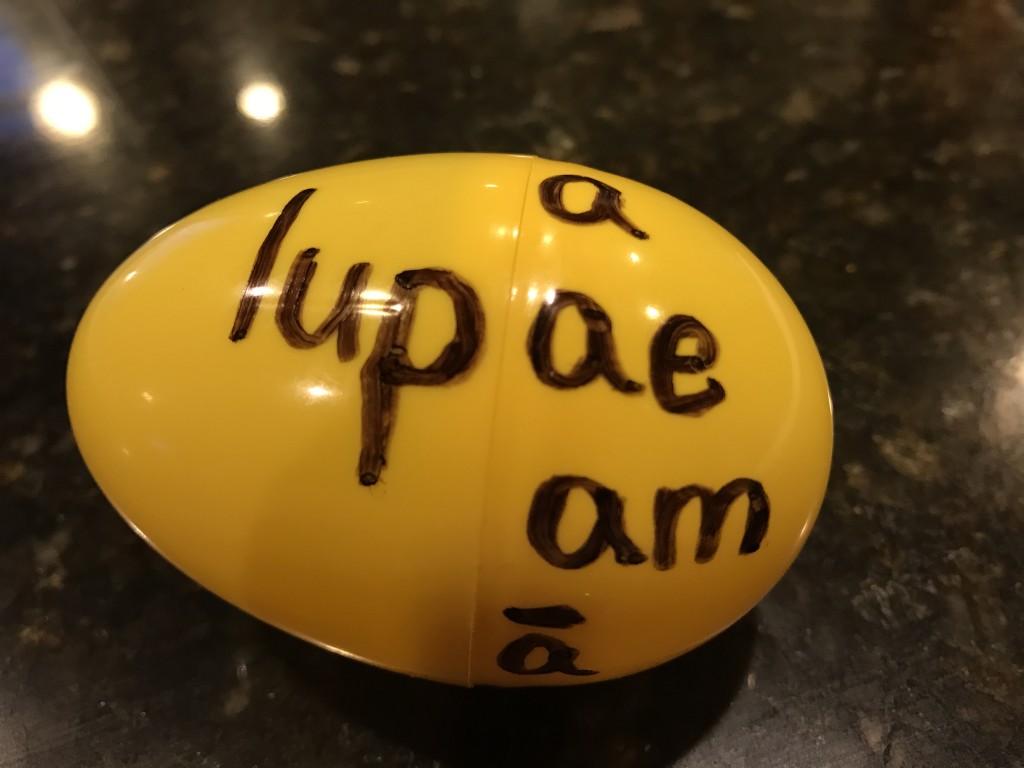 2. Write on the eggs to create a fun tool for grammar practice or guided composition. On one half of the egg, write a the base of a noun. Then write the endings on the other half. Students can turn the right half of the egg in order to decline the noun.

3. Use the eggs to conduct a scavenger hunt for practicing vocabulary or any cultural topic. For example, students might be given a first clue that tells them to find a picture of a “lupa.”  After they find the picture of the she-wolf (taped to the wall or placed somewhere for them to find), they should see an egg nearby. They open the egg to read the next clue, which should lead them to the next picture and egg.

Featured Word: palatial
Each issue will feature a challenging English word that we encourage you and your students to explore together. The English word will always come from one or more Latin words.

The Palatine was the hill chosen by Romulus, and it became the first hill of his city. Rome’s kings, later rulers, and nobility lived on that hill. The Palatine Hill’s name has an interesting origin. It comes from the goddess “Pales,” who protected shepherds. From this information, we can deduce that Rome began as a small settlement of shepherds.

Our English word “palace” is a result of the fact that huge homes for rulers were built on the Palatine Hill. The picture above (from Wikimedia user Cassius Ahenobarbus) shows a model of several imperial palaces situated on the Palatine Hill overlooking the Circus Maximus. The word “palatial” is also related to “palace” and refers to something that is large and magnificent like a  palace.

Here are some fun ideas for celebrating Rome’s birthday: 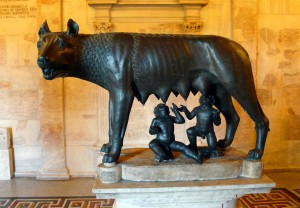