It’s the most wonderful time of the year: the festival of Saturnalia!  This month: a reenactment of Saturnalia, writing cards in Latin, carols in Latin, uses for gingerbread man cookies, and more!

N.B. – Since this issue is all about the holiday of Saturnalia, we have moved the informative “Holiday” section to the top of the page.

Holiday: Saturnalia
Each issue will feature an upcoming holiday from ancient Greek or Roman culture that you may wish to explore with your students.

Saturnalia is a Roman holiday celebrating the god Cronus (Roman name: Saturn). At the Temple of Saturn, the Romans started the celebration by untying the ropes from around his statue, in order to symbolically free him and return him to power.  The Romans believed that in very early times, when Saturn ruled the earth, there was a golden age when all was harmonious in the world.  For the Romans, Saturnalia was a chance to pretend that the golden age had returned.

The holiday was celebrated on December 17th, during the week before the winter solstice.  The length of Saturnalia celebrations was usually between three and seven days.  A common greeting was the phrase, “Iō, Sāturnālia!” (Iō is pronounced “Yo.”) During Saturnalia, many rules were loosened.  Gambling was allowed, banquets were held, Romans sang naked in the streets, and the social order was inverted.  Slaves were given many freedoms which they did not usually enjoy because the Romans believed that during the reign of Saturn, no one was a slave.  The freedom of slaves was part of the free spirit of the season.

There are many ways in which Christmas and Saturnalia differ, but they share some similarities: both holidays bring us close to loved ones, both holidays provide cheer during the darkest time of the year, and both holidays offer hope for those who suffer.  Learning about Saturnalia is important because it teaches us about those who came before us.  Just as the holidays are a time for families to gather from near and far, Saturnalia encourages us to connect with the larger human family from the ancient times to the present day.

Main Feature: Two New Lesson Plans
Each issue will feature two lesson or activity ideas: one related to the Latin language, and one related to Classical Studies (Greek or Roman culture, mythology, or history). Email us to suggest a topic for a future issue!

Background: Saturnalia is a holiday which Romans celebrated during the month of December.

Introduction: This lesson reenacts aspects of the Saturnalia celebration and provides an opportunity for students to learn about Roman religion.

Special Concerns: Every school has different rules regarding holiday celebrations in class.  If your school prefers class time to be more structured during the holidays, it may be possible to have an after school gathering or to run this event during a Latin club meeting. A “Saturnalia in January” day could also be a fun option.

Objectives: Students will learn about the role of Saturn in Roman religion and will recognize connections to modern winter celebrations.

Background: The holidays are a time for writing cards and letting loved ones know we care.  This letter-writing lesson can work for many levels of Latin.  For beginning students, they can be asked to write only the salutation and valediction in Latin.  For advanced students, teachers can assign an entire letter in Latin.

Special Concerns: Students may celebrate a variety of holidays, so it would be best to provide materials which include many colors so that Christmas cards are not the only option.

Objectives: Students will learn salutations and valedictions in Latin.  This knowledge will provide a good foundation for reading Latin letters in later years.  The letters of Cicero and Pliny may provide nice templates for students who want authentic examples of these phrases.

If you are a non-Latin teacher who would like to give your students an extra challenge by using this authentic method, here are some brief, basic instructions:

Online Resource: Latin Carols!
Each issue will feature a new or popular online resource that could prove useful for Latin and Classical Studies instruction. We aim to stay current so that you can wow your students with how “with-it” you are when it comes to technology!

This website by Laura Gibbs provides at least one Latin carol for each day in December.  Teachers can use this website in many ways. They can:

Random Find: Gingerbread Cookies or Sour Patch Kids
Many items being sold today do not directly connect to Latin and Classical Studies, but with a little effort, we can adapt them to serve our purposes. This section explores these types of objects.

During Saturnalia, it was a custom to eat human-shaped cookies.  This is because, as the myth goes, the god Saturn ate his children so that he would not lose his power.  Students can participate in this tradition by eating gingerbread men or Sour Patch kids candy. 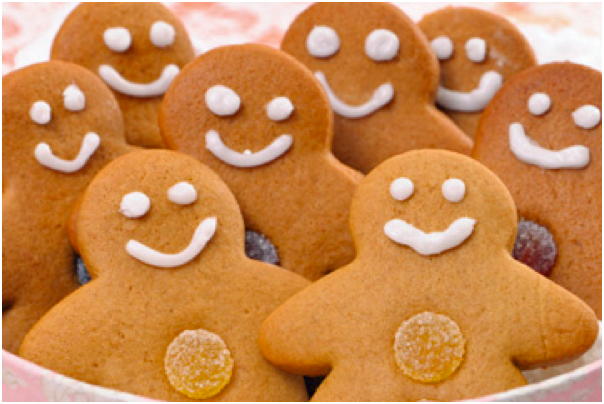 How we found them: These can be easily purchased in grocery stores or convenience stores.  Gingerbread cookies can be baked at home.

Possibility #1: Doodles
Students can place their human-shaped cookie on a piece of paper.  Next, they can doodle scenes around them (houses, forests, mountains, etc.) and write Latin sentences which explain the image.  Another fun way to bring life to these cookies is to have students make speech bubbles with Latin words inside so that the cookies can develop personalities.

Possibility #2: Label parts of body on gingerbread cut-out
Students can place their human-shaped cookie on a piece of paper, as in the previous activity.  Next, they can label the body parts of the cookie by drawing lines and writing in the correct Latin word.  For schools which have rules regarding food in the classroom, this gingerbread coloring page can be a great way to adapt this lesson and provide an opportunity for students to learn Latin names of body parts.

Featured Word: Saturday and chronology
Each issue will feature a challenging English word that we encourage you and your students to explore together.  The English word will always come from one or more Latin words.

Saturday was called the Day of Saturn in Ancient Rome.  Saturn governed time and is also the deity worshipped during the holiday Saturnalia.  Saturn is known by the name Cronos in Greek mythology, and the word chronology comes from his name.  Chronological order is an order organized by the time when certain events happened.  For a word this long, it would benefit students to have chances to practice saying the word aloud in order to work on pronunciation.

What types of foods could my students bring for a Saturnalia party?

The following foods were enjoyed by Romans during Saturnalia.  They are easily found in supermarkets and require no preparation:

Romans also ate many other food items which could be difficult to incorporate into a lesson at school, such as nuts, wine, and dormice!

Some students who enjoy baking may, instead, want to make these mouse-shaped treats (with candy ears instead of almond ears): http://allrecipes.com/recipe/chocolate-mice/ 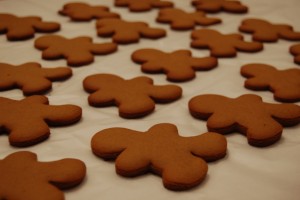