“I fear the Greeks, even bearing gifts…”

Background: Students usually love opportunities to make-believe and perform in class.  This activity gives students a chance to research a character and pretend to be that character for a whole class.  In this way, students will know the Trojan War not only through research, but through stepping into of the shoes of one of the famous characters involved in the epic stories.

Introduction: This is an activity which works especially well with middle school students. It’s a make-believe day on which students have multiple conversations in character to bring the Trojan War to life.

Objectives: To research one character in-depth and be prepared to role play that character, and to learn the major characters of the Trojan War through pretend conversations.

Special Concerns: To encourage active listening, teachers can tell students that there will be a contest or trivia game the following class to see which team (Trojan or Greek) remembers the most from Character Day.  Another tip is to pick a color for each side (Greek and Trojan) to wear that day so that students remember which sides characters are on.

Background: A “snake sentence” is a type of composition exercise which is a great way to draw attention to Latin endings through context clues and guided output.  These “snakes” can even be tied to a lesson on the Trojan priest named Laocoön, who was killed by serpents sent by the goddess Juno.

Introduction: After students have learned about the Trojan War, they will have some familiarity with characters and the context of the story.  This is a perfect opportunity to provide them with exercises which require a knowledge of both context and grammar.  Teachers can either make snake sentence worksheets or simply put one up on the board before class for students to work on as everyone gets seated.

Special Concerns: Because students have a 50/50 chance of guessing correctly, it is important to offer multiple snake sentences to students or complement this activity with a more open ended exercise like written Latin sentences.  This way teachers can be sure that students understand why some endings are used instead of others.

Objectives: To draw attention to Latin endings by giving students limited options to choose from.

Construct Latin sentences about the Trojan War and give each word two grammatical options, similar to the model below. Students will then draw outlines around the words which would make an appropriate sentence, snaking their outline up and down as they select the correct form.  Advanced students who would like a challenge can make snake sentences using Greek names which will follow different declension patterns.

Online Resource: Odyssey Game
Each issue will feature a new or popular online resource that could prove useful for Latin and Classical Studies instruction. We aim to stay current so that you can wow your students with how “with-it” you are when it comes to technology!

This is a fun game which tests students’ knowledge of The Odyssey.  Each student picks a character (Odysseus, Telemachus or Penelope) and then answers questions about the plot of the story. This is a wonderful substitute to the usual quiz format, and the game is quite extensive with multiple options to choose from as they role play their characters.  Additionally, there are helpful explanations after each question which explain why the answer was correct or incorrect.  It may work well to pair students for this activity because it will promote discussion about the story as they select the appropriate options.  Your students will love this chance to test their knowledge using a computer role playing game!

Holiday: Ludi Piscatores
Each issue will feature an upcoming holiday from ancient Greek or Roman culture that you may wish to explore with your students.

Open your year with a discussion about the Ludi Romani, which was a holiday held for several days in early September and featured a variety of athletic competitions and games.  The Romans celebrated through games to boost morale, earn support for an emperor, and honor someone who has died. Even before the Romans, there was an ancient tradition of holding games in someone’s honor.  For example, Aeneas holds funeral games for his father in Book V of The Aeneid,  and the Greeks perform games in Book 23 of The Odyssey in memory of the warrior Patroclus.

You can hold your own classroom Ludi Romani in order to build classroom community. Simple party games like a bean bag toss, pin-the-tail-on-the-donkey, or Twister could produce a game atmosphere even in a small classroom.  If you are able to take your students outside, you could substitute these games with other classic outdoor games like a wheelbarrow “chariot” race or relay game.  Before long, your students will be giggling together and excited for the upcoming year!

Random Find: Battle Helmets
Many items being sold today do not directly connect to Latin and Classical Studies, but with a little effort, we can adapt them to serve our purposes. This section explores these types of objects.

A straw beach hat can be repurposed as an ancient helmet!  These hats can be found in shopping malls or beach shops, and with only a few materials can become a staple prop in your classroom.  After purchasing the hat and removing any tags or embellishments, paint the wicker with silver spray paint.  When the paint has dried, cut off the front two thirds of the brim, and slope back as you cut.  You will cut half of the brim to be the ear flaps and attach them to the side below the holes with duct tape. Use more duct tape to prevent fraying at the unfinished ends.  This hat could even be used on Trojan War Character Day! 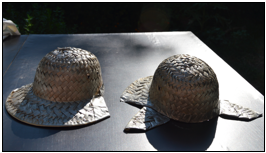 How we found them: Gregory Stringer, an instructor of LatinSummer Rome and the Latin teacher in
Burlington, Massachusetts, received these helmets from students who cleverly recognized the creative potential behind this common costume item. Thank you to Burlington High School’s class of 2016 Latin students for the design and the instructions!

Featured Word: muse
Each issue will feature a challenging English word that we encourage you and your students to explore together.  The English word will always come from one or more Latin words.

Classical epics frequently begin with an invocation of the Muse, or a reference to singing like a muse. Muses were goddesses of the arts and sciences, and the word “muse” inspired many Latin words.  A museum is a building dedicated to arts or science.  A musician is someone who makes art by producing sounds.  The many muses each governed a different form of art or science.  For example, Kleio was the muse of history and Calliope was the muse of poetry.  Ask students to think of a hobby they enjoy and a muse who might inspire that hobby.  Encourage them to draw pictures of the muse with props which help the viewer guess her special activity.

Advice & Questions:
Do you have any organizational tips for the upcoming year?

At the beginning of the year, I give each student a colorful binder clip.  I use white stickies to label each clip with the student’s Latin name, and tell the students to hang onto them by putting the loop of the clip into the ring of their binder.  When they turn in flashcards or a workbook to grade, they put on the clip.  This makes it faster to hand things back to the students and holds their papers together.

Another tip is to scan some of their work as pdf files before handing it back.  This makes it much easier to prepare for conferences or extra help sessions, and can become a helpful resource that reveals the progress students have made over the year.

Finally, I find it helpful to make a file called “This Week” either in a filing cabinet or on a desktop.  This can hold all the files which you use that week, and every Friday afternoon I make sure to empty it out by sorting the documents or papers as needed.  This means that even during a busy week, I know my necessary documents are separated from the ones I don’t need.  I have also encouraged my students to have a “this week” folder so that when they need to pull out a recent homework assignment, they don’t need to look through all of their homework papers. 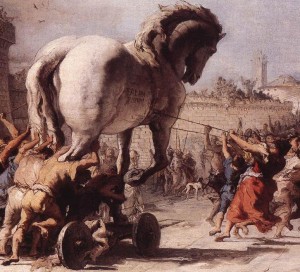